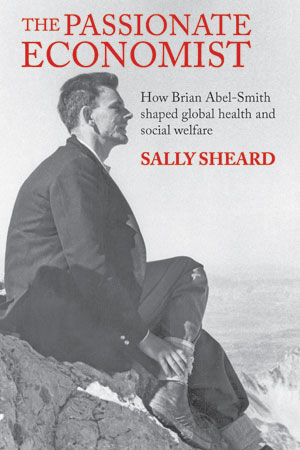 I enjoy reading about the lives of effective academics. Sally Sheard’s biography of Brian Abel-Smith drew me in with its title: ‘The Passionate Economist’. It hints at a life to which some of us might aspire.

Brian Abel-Smith was an economist who straddled academia and politics. He spent much of his career with the LSE, but his global impact came through work with the WHO, Europe and developing nations’ governments.

Before embarking on this hefty hardback, my prior knowledge of Brian Abel-Smith was sparse. I delved into my reference manager – sure I’d read some of his work – to find a chapter in a book first published before I was born. The latest generation of health economists could easily miss Abel-Smith’s work. Sheard’s book reveals some reasons why. He never participated in the Health Economists’ Study Group and dedicated much of his career to practical work with an international focus. He was reluctant to engage with the theory-heavy work by the likes of Tony Culyer, which helps explain why many MSc courses don’t include him.

Sheard starts out by describing the early years of a boy with whom most readers will have little in common. Born in 1926 to a Brigadier-General and distant relation to the royal family, Brian was surrounded by people who were already – or were soon to be – key players in politics and academia. Like Brian, Clement Attlee had attended Haileybury school and promoted several Old Haileyburians in his government. At Cambridge University – where Brian was taught by the likes of Joan Robinson – Labour minister Hugh Dalton was trying to recruit promising students. He invited Brian for supper in 1951. Brian’s privilege is suitably framed and is not likely to alienate the reader, but the torrent of name-dropping might. It is difficult to keep up with so many acquaintances, and difficult to care. Though we at least observe Brian’s adept social skills.

It was charm (coupled with good connections) that enabled Brian to meet the father of social policy, Richard Titmuss. Theirs was to be a long and fruitful professional relationship and friendship, and the basis of Brian’s commitment to the LSE. The Beveridge Report was published when Brian was 16, and readers will find its principles reverberating through his life. Brian was dedicated to the NHS, and his first major research project involved costing the health service. His findings informed the 1956 Guillebaud Report, which concluded that the NHS was pretty good value for money. As Brian made quick progress in his academic career, he prudently maintained relationships with the political world.

It was Brian’s political writing that really got him noticed; his first publication was a pamphlet for the Fabian Society. Despite their incongruence, Brian handled the two worlds of politics and academia masterfully. Sheard likewise gives each their due attention in the retelling. The book is particularly enjoyable when it recounts episodes where Brian’s academic integrity shines through; possibly to the detriment of his political ties and socialist credentials. He regularly criticised Labour policy and shocked colleagues like Julian Tudor Hart when he wrote in support of competition, consumer choice and user fees. I rarely traverse political history as I find it pretty dull, but in staging this history as a backdrop to Brian’s life, Sheard was able to keep me engaged. My limited knowledge of the academic and political history of social policy in Britain left me with much to learn; better informed (or older) readers might not gain so much from the revision.

Brian’s interests extended beyond the ivory tower and beyond Westminster, and so he took roles in hospital management and governance. His work formed part of the basis for the formation of the Child Poverty Action Group, to which he dedicated a lot of time. He also had an entrepreneurial side, setting up a successful men’s clothing business, Just Men. His work is not shown to be of special relevance to the study of health economics, but rather to health and social policy more generally. Seasoned observers might not be surprised to read many parallels between the debates of Brian’s time and those currently storming on Twitter.

For me, the biography does not quite live up to its title. Abel-Smith is presented as many things – conscientious, charming, virtuous, humble, loyal – but his passion does not shine through. The book is written in a matter-of-fact style, and the fact of the matter seems to be that Brian was not particularly demonstrative. But a historical account – more a biography of global health policy than of Brian Abel-Smith – might be fitting. Brian’s life is a history of global health policy. His career tracks international developments and the book will be a treasure trove for historians.

In The Passionate Economist, Sheard has produced a valuable overview of the history of global health policy that many young health economists (like myself) might lack. Part of the joy in reading a biography – for me, at least – is identifying those tantalising gaps in the evidence, which require or encourage the author to use their knowledge of the subject to suggest what might have been. The Passionate Economist contains little of this and Sheard seems to struggle to get under the skin of her subject. But maybe that’s the point; Brian’s passion is veiled by his self-effacing nature. His impact on social policy and health services, both in the UK and internationally, was prodigious. And yet many health economists have never heard of him. There is wisdom in this.