You won’t believe what these NHS productivity statistics mean for health policy!

Newly published research from Chris Bojke and co-authors estimates productivity growth in the NHS from 1998/1999 to 2013/2014. Total output of the NHS comprises both the volume of various services and their quality while inputs are approximated by total expenditure. Growth in productivity is then calculated by comparing growth in output with growth in inputs. Their main results are shown in figure 1, reproduced from the paper. Over the fifteen year period total productivity growth was 4.1% and under the previous coalition government productivity growth averaged 1.6% per annum. 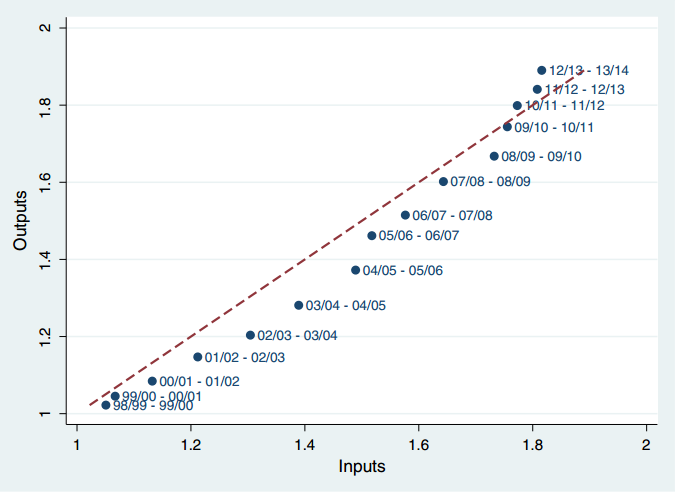 Early on during the coalition government the NHS was set a productivity challenge to find around £50 billion of productivity savings by 2019/20. This was equivalent to an increase in productivity of around 5% per annum, which was completely unprecedented at the time. Compare figure 1 to figure 2, which shows the targets the government was imposing. The new productivity data show that the NHS has not and is unlikely to achieve anywhere near this figure. Indeed, one of the cornerstones of the government’s healthcare policy, a 7-day NHS, is unlikely to be cost-effective and may further reduce productivity growth despite attempts to reduce labour costs through changes to contracts.

Figure 2. Inputs and outputs for the NHS up to 2009, with the orange circles representing the coalition government’s goal. (From Appleby (2012))

When it comes to overall changes in productivity it is not possible to disentangle changes in efficiency, improvements in technology, and economies of scale. Generally, new technologies are both more expensive and provide greater benefits, but their effect on efficiency depends on whether they are more cost effective than what the NHS is currently achieving with its inputs. Some research suggests that the cost-effectiveness threshold for adoption of new technologies is too high potentially reducing efficiency. However, healthcare providers may have disinvested from the least cost-effective technologies as their budgets contract, improving efficiency.

It is widely acknowledged that there are shortfalls in staffing in the NHS. Guidelines for safe staff to patient ratios are frequently not met. Bojke et al. show that labour inputs to the NHS, which account for 42% of all inputs, hardly changed under the coalition government. Staff inputs are not considered in the same way as technologies; it is not known what the “cost-effectiveness” of a doctor is for example. Increasing labour inputs can improve patient safety, thereby reducing patient harm and length of stay, while also potentially improving the efficiency with which healthcare is provided as staff are complementary inputs with other healthcare capital. However, investment in labour, unlike capital goods, takes place in a broader political context as the current junior doctor’s strikes demonstrate. This may lead to a suboptimal policy choice about investment in and remuneration of labour, a so-called ‘government failure’.

[…] has indeed increased as fast as the rest of the economy in the health care sector. Indeed, we have discussed productivity growth in the health sector in England and Wales previously. The cost disease may well […]

[…] has indeed increased as fast as the rest of the economy in the health care sector. Indeed, we have discussed productivity growth in the health sector in England and Wales previously. The cost disease may well […]

[…] and the volume of activity required of the NHS have increased, without equivalent increases in funding or productivity. Over the course of the year, there are repeated claims of crises as hospitals are ill-equipped for […]

[…] input costs, and redesigning services. Alas, these efficiency targets were not met, as we have discussed previously. Indeed, over the past 20 years, there has been little improvement in efficiency. The Office for […]