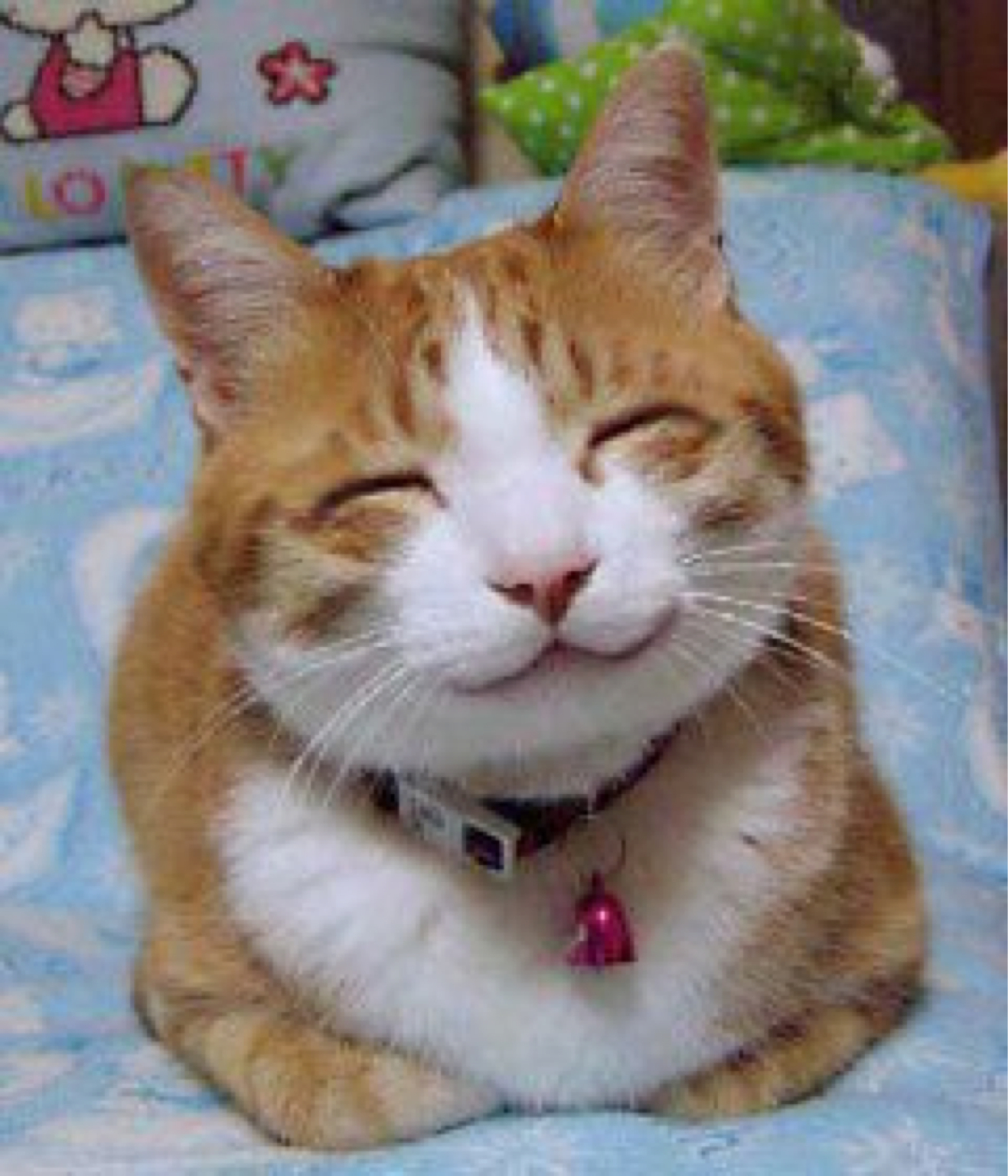 In the early years of the coalition government, David Cameron lauded the measurement of happiness and well-being as an indicator of national performance. Data on life satisfaction have been collected and published by the Office for National Statistics every year since 2012. Despite this, very little is said about well-being. It is not discussed at spending or policy reviews and rarely in the media. Gross domestic product (GDP) continues to dominate the coverage of national performance and the potential impact of policies such as Brexit. Nevertheless, a precursory glance at the data can reveal an interesting picture of national well-being. 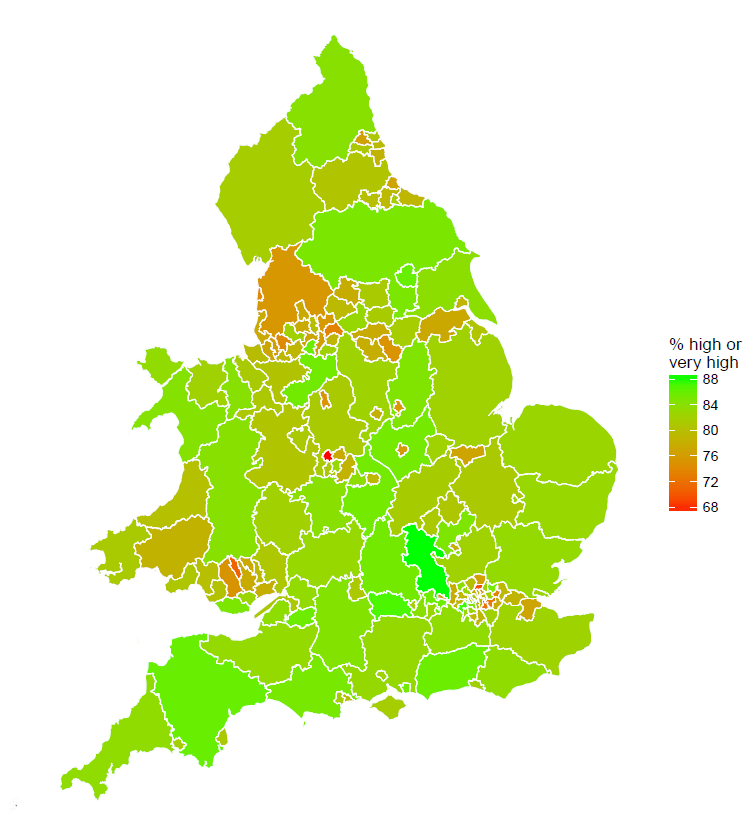 The map above plots the proportion of people reporting their life satisfaction to be ‘high’ or ‘very high’ across England and Wales. This corresponds to a score of seven or more on a ten point scale in response to the question:

Overall, how satisfied are you with your life nowadays? Where 0 is ‘not at all satisfied’ and 10 is ‘completely satisfied’.

There are clearly variations across the country, with the most obvious being the urban/rural divide. The proportion of people reporting ‘high’ or ‘very high’ life satisfaction in the UK has also increased over time, from 76.1% to 81.2% between 2012/3 and 2015/6, corresponding to a mean life satisfaction rating rising from 7.42 to 7.65.

Well-being data can also be used to evaluate the impact of policies or interventions in a cost-benefit analysis. Typically an in-depth analysis may model the impact of a policy on household incomes. But, these changes in income are only valuable insofar as they are instrumental for changes in well-being or welfare. Hence the attraction of well-being data. To derive a monetary valuation of a change in life satisfaction economists consider either compensating surplus or equivalent surplus. The former is the amount of money that someone would need to pay or receive to return them to their initial welfare position following a change in life satisfaction; the latter is the amount they would need to move them to their subsequent welfare position in the absence of a change. For example, to estimate the compensating surplus for a change in life satisfaction, one could estimate the effect of an exogenous change in income on life satisfaction. Such an exogenous change could be a lottery win, which is exactly the approach used in this report valuing the benefits of cultural and sports events like the Olympics.

Health economists have been one of the pioneering groups in the development and valuation of measures of non-monetary benefits. The quality-adjusted life year (QALY) being a prime example. However, a common criticism of these measures is that they only capture health related quality of life, and are fairly insensitive to changes in other areas of well-being. As a result there have been a growing number of broader measures of well-being, such as WEMWBS, that can be used as well as the generic life satisfaction measures discussed above. Broader measures may be able to capture some of the effects of health care policies that QALYs do not. For example, centralisation of healthcare services increases travel time and time away from home for many relatives and carers; reduced staff to patient ratios and consultation time can impact on process of care and staff-patient relationships; or, other barriers to care, such as language difficulties, may cause distress and dissatisfaction.

There are clearly good arguments for the use of broad life satisfaction and well-being instruments and sound methods to value them. One of the major barriers to their adoption is a lack of good data. The other barrier is likely to be the political willingness to accept them as measures of national performance and policy impact.

The other major concern I’d have is that self-reported “satisfaction” has a number of well-known pitfalls. We see this with measurements of physician satisfaction, where a friendly bungler will outscore a highly competent grump. The challenge with a WELBY (I think “WALY” would run into copyright fights with Pixar :P) will be to ensure that it is tied to concrete and quantifiable correlates of well-being, to give a more holistic view of the underlying concept of “Well Being”.

I would suggest relative income (i.e., do you make more than, about the same, or less than your neighbours), and some measure of social network strength (i.e., how many friends or family members could you call in a time of crisis) as being important correlates. I’m sure people in sociology or psychology would have a more evidence-based list.

There are a number of life satisfaction studies that aim to validate it as a measure (take a look at the OECD report for a few examples http://www.oecd.org/statistics/Guidelines%20on%20Measuring%20Subjective%20Well-being.pdf). But to make it a more useful tool for predicting the effect of certain interventions or policies, then development of decent models and understanding underlying constructs is definitely important.

I think wellbeing is an interesting area. I ask a lot of services to collect wellbeing data and find that it often does not correlate well with HRQOL measures like EQ-5D, which means that wellbeing is different to functional health as measured by the EQ-5D.

As you will know there have been some plans to produce a wellbeing-QALY (a WELBY or a WALY) but I don’t know if this has happened yet.

It would be interesting to have a weighted national accounting measure that included the value of wellbeing, as well as other measures like health, GDP and the value or the long term sustainability of resources used to generate that GDP (Australia has continuous high GDP but they have to mine a lot of resources out of the ground to maintain it).

I have looked at (very crudely) putting a value on SWEMWBS changes but would like to do this in a more robust way;
https://papers.ssrn.com/sol3/papers.cfm?abstract_id=2869251