Variations in NHS admissions at a glance 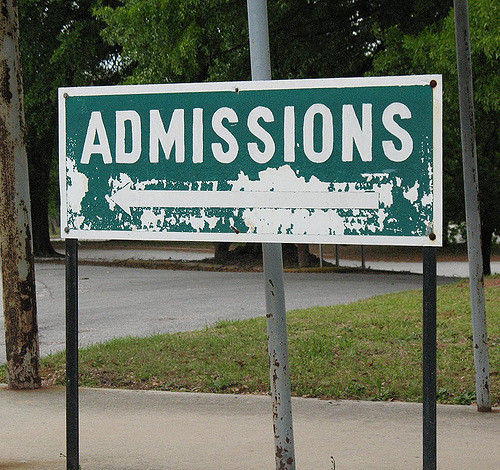 Variations in admissions to NHS hospitals are the source of a great deal of consternation. Over the long-run, admissions and the volume of activity required of the NHS have increased, without equivalent increases in funding or productivity. Over the course of the year, there are repeated claims of crises as hospitals are ill-equipped for the increase in demand in the winter. While different patterns of admissions at weekends relative to weekdays may be the foundation of the ‘weekend effect’ as we recently demonstrated. And yet all these different sources of variation produce a singular time series of numbers of daily admissions. But, each of the different sources of variation are important for different planning and research aims. So let’s decompose the daily number of admissions into its various components.

Daily number of emergency admissions to NHS hospitals between April 2007 and March 2015 from Hospital Episode Statistics.

A similar analysis was first conducted on variations in the number of births by day of the year. A full description of the model can be found in Chapter 21 of the textbook Bayesian Data Analysis (indeed the model is shown on the front cover!). The model is a sum of Gaussian processes, each one modelling a different aspect of the data, such as the long-run trend or weekly periodic variation. We have previously used Gaussian processes in a geostatistical model on this blog. Gaussian processes are a flexible class of models for which any finite dimensional marginal distribution is Gaussian. Different covariance functions can be specified for different models, such as the aforementioned periodic or long-run trends. The model was run using the software GPstuff in Octave (basically an open-source version of Matlab) and we have modified code from the GPstuff website. 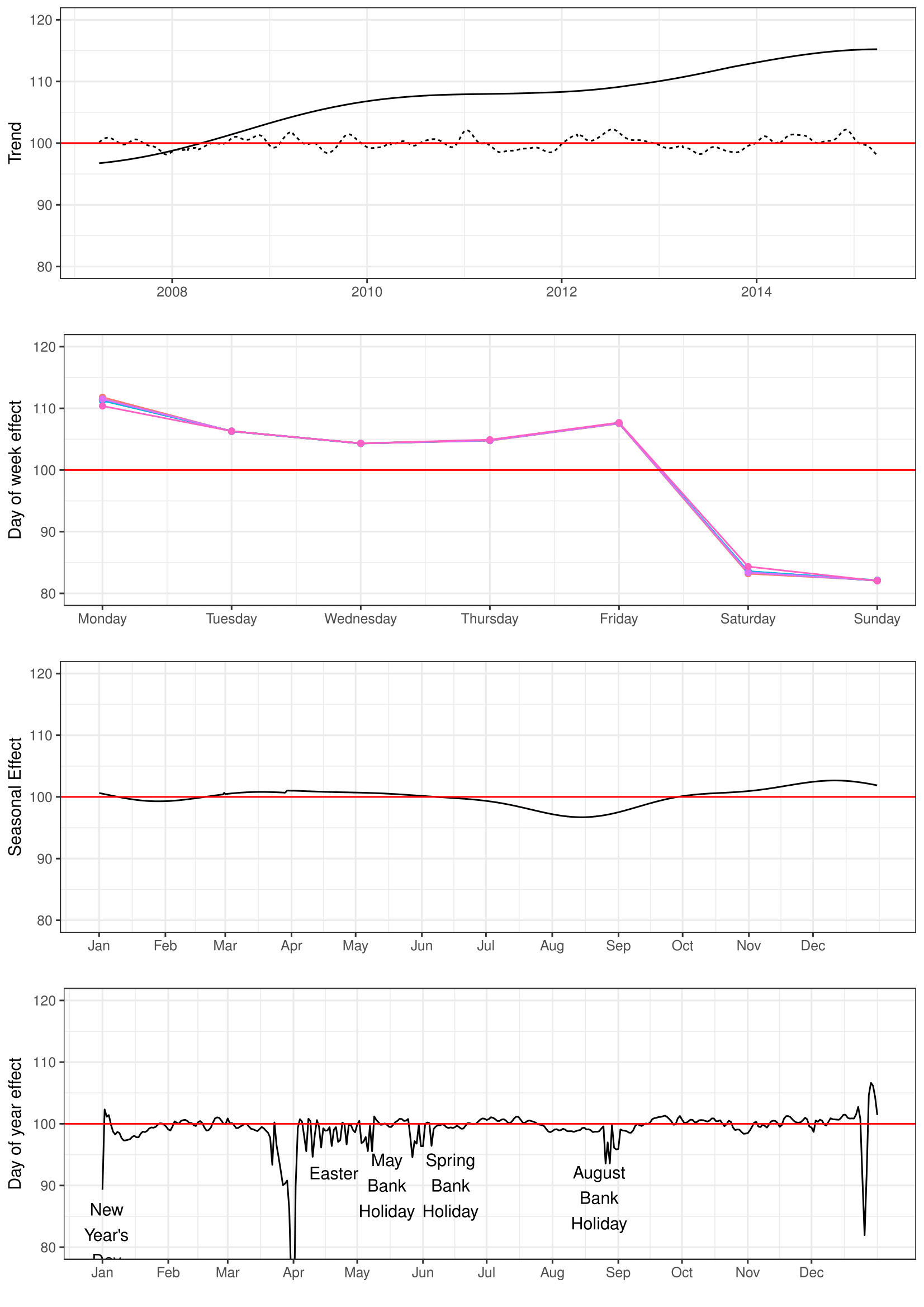 The four panels of the figure reveal to us things we may claim to already know. Emergency admissions have been increasing over time and were about 15% higher in 2015 than in 2007 (top panel). The second panel shows us the day of the week effects: there are about 20% fewer admissions on a Saturday or Sunday than on a weekday. The third panel shows a decrease in summer and increase in winter as we often see reported, although perhaps not quite as large as we might have expected. And finally the bottom panel shows the effects of different days of the year. We should note that the large dip at the end of March/beginning of April is an artifact of coding at the end of the financial year in HES and not an actual drop in admissions. But, we do see expected drops for public holidays such as Christmas and the August bank holiday.

While none of this is unexpected it does show that there’s a lot going on underneath the aggregate data. Perhaps the most alarming aspect of the data is the long run increase in emergency admissions when we compare it to the (lack of) change in funding or productivity. It suggests that hospitals will often be running at capacity so other variation, such as over winter, may lead to an excess capacity problem. We might also speculate on other possible ‘weekend effects’, such as admission on a bank holiday.

As a final thought, the method used to model the data is an excellent way of modelling data with an unknown structure without posing assumptions such as linearity that might be too strong. Hence their use in geostatistics. They are widely used in machine learning and artificial intelligence as well. We often encounter data with unknown and potentially complicated structures in health care and public health research so hopefully this will serve as a good advert for some new methods. See this book, or the one referenced in the methods section, for an in depth look.

[…] they have not claimed anonymity – will appear at the top of the blog post. Let’s take a recent example. To start with, your citation should look something […]

Thank you for posting this analysis. It is great to see that this type of analysis seems to work well for all (emergency) hospital admissions as well as the births example from BDA. It is very interesting to see the similarities between the emergency admissions and the births example. It seems to me that this strongly suggests that emergency admissions are, like births, partly scheduled within a window period of time. That’s interesting because we know about the mechanisms that create the effect that a proportion of births can be scheduled within a window of time (c-sections and induced births). I wonder if this could lead to some kind of quantitative estimate of the (latent) flexibility in the timing of emergency admissions.

I would be really interested to know if you have any other plans to take this forward to contribute to specific research questions? For example, does this change how we should think about identification strategies in research relating to the weekend effect, seasonal changes, etc?

I agree that these patterns seem to be reflected across lots of different healthcare related outcomes. I think it would suggest that, at least for the lower severity emergencies, there is some flexibility in day of treatment. I would imagine that from both demand and supply side perspectives this is managed pretty well, with the weekend levels of admission perhaps revealing the levels of admissions that can’t wait.

I wasn’t sure exactly how to take this forward as none of this is exactly new knowledge. My next thought was to do the same analysis but on deaths by date of admission to look at how the patterns are related as this would shed yet more light on the weekend effect mechanisms. But more than happy to jump on board with any good ideas

Best of luck with it, if you can do the same with deaths or other outcome data then I’m sure it will lead somewhere interesting and useful. There are a lot of directions you could take it in better identifying and/or explaining the weekend effect mechanism. Probably by better modelling of how demand at weekend/public holidays in redistributed over time vs simply decreased on weekend days. I’m hoping to try the same analysis with Scottish data at some point in the near future if I can get access to enough of the data.