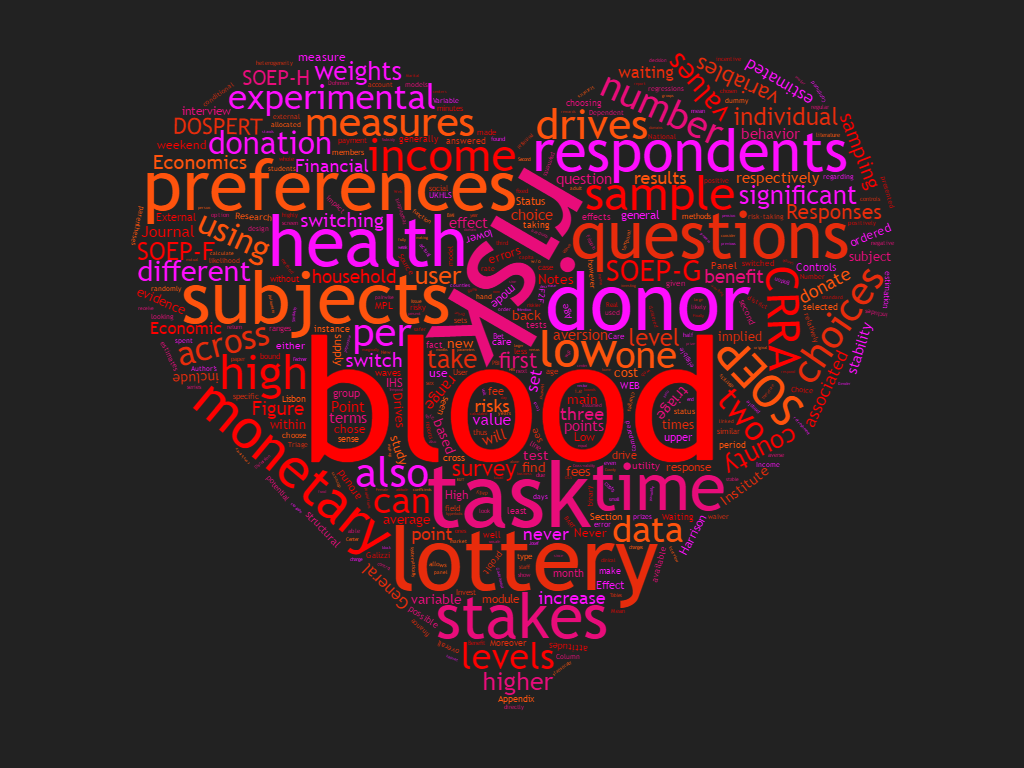 On the third Thursday of every month, we speak to a recent graduate about their thesis and their studies. This month’s guest is Dr Sara Machado who graduated with a PhD from Boston University. If you would like to suggest a candidate for an upcoming Thesis Thursday, get in touch.

What makes blood donation an interesting context for economic research?

I’m generally interested in markets in which there is no price mechanism to help supply and demand meet. There are several examples of such markets in the health field, such as organ, bone marrow, and blood donations. In general, all altruistic markets share this feature. I define altruistic markets as markets with a volunteer supply and no market price, therefore mainly driven by social preferences.

In a way, the absence of a price leads to a very traditional coordination problem. However, it requires not-so-traditional solutions, such as market design, registries, and different types of incentives, due to many historical, political, and ethical constraints (which leads us to the concept of repugnant markets, by Roth (2007)). The specific constraints for blood donations are outlined in Slonim et al’s The Market for Blood, which also outlines the main experimental findings regarding the effects of incentives on blood donations. The blood donations market is the perfect setup to study altruistic markets, not only because of its volunteer supply but also due to the fact that it is a potentially repeated behaviour. Moreover, the donation is not to a specific patient, but to the supply of blood in general. Social preferences, as well as risk and time preferences, play a key role in minimizing market imbalances.

How did you come to identify the specific research questions for your PhD?

I was quite fortunate, due to an unfortunate situation… There was a notorious blood shortage, in Portugal, when I started thinking about possible topics for my dissertation. It got a lot of media coverage, possibly due to political factors, since the shortage happened shortly after a change in the incentives for blood donors. My first question, which eventually became the main chapter of my dissertation, was whether there was a causal relationship.

The second chapter is the outcome of spending many hours cleaning the data, to tell you the truth. I started to realize that there are many other factors determining blood donation behaviour. All non-monetary aspects of the donation process are very relevant in determining future donation behaviour (also highlighted by Slonim et al (2014) and Lacetera et al (2010)). I show that time can be a far more important currency than other forms of incentives.

Finally, I realized how important it would be for me to be able to measure social preferences to continue my research on altruistic markets and joined a team lead by Matteo Galizzi, who is working on measuring preferences of a representative sample of the UK population. My third chapter is the first installment of our work in this domain.

Your research looked at people’s behaviour. How does it relate to the growing recognition that people make ‘irrational’ choices?

The more I look into this, the more I think that we have to be careful about a generalization of irrationality. There is nothing “irrational” in blood donors’ behaviour, for the most part. So far, I have only resorted to very neoclassical models to explain donors’ behaviour – and it worked just fine.

The way I see it, there are two separate aspects to take into account. First, the market response. It is worrisome if we find market responses that are only possible if the majority of agents are making “irrational choices”. Those markets need tailored interventions to inform the decision-making process.

The second aspect zooms in into individual decision-making. In this case, it is important to determine whether there are psychological biases leading to suboptimal, or irrational, choices.

One might argue that a blood donation due to an emotional response to some stimuli is “irrational”. I strongly disagree with that categorization. For example, there is nothing suboptimal in donating blood as a sign of gratitude to previous blood donors.

The main message is that it is important to identify behavioural biases that lead to inefficient market outcomes, but “irrational choices” is too wide an umbrella term and should be used with caution.

Are any of your key findings generalisable to settings other than blood donation?

I think two key findings are quite general. The first one is the fact that it is possible to design incentive schemes that bypass the question of the crowding out of intrinsic motivation. This is a fairly general issue, that ranges from motivating employees at the workplace in general to the design of incentive schemes for physicians, to the elicitation of charitable giving, just to name a few examples. As long as it is a repeated behaviour, the result holds. This highlights a different aspect, the importance of placing lab and isolated field experimental evidence into perspective when informing policy making. There is extensive experimental literature on the crowding out of intrinsic motivation, but very little has been done at the market level and with a longitudinal component. This has limited the ability to take into account the advantages of focusing on repeated blood donation, on the one hand, and of incorporating demand side responses, on the other hand (namely by increasing the number of blood drives).

The second key aspect is the advantage of using time as the main opportunity cost faced by a volunteer supply, in the context of prosocial behaviour.

I believe there are two key ingredients in the design of the optimal blood donation policy: 1) promoting blood donation as a repeated behaviour; and 2) increasing the responsiveness of blood donation services in order to minimize demand and supply imbalances.

The first aspect can be addressed by designing incentive schemes targeted at repeated donors, with no rewards for non-regular behaviour. The second would greatly benefit from the existence of a blood donor registry, similar to the one already in place for bone marrow donation. This registry would allow for regular blood donors to be called to donate when their blood is needed, minimizing waste in the system. The organization of blood drives would also be more efficient if such a system was in place.

These two components contribute to the development of the blood donor identity, which guarantees a steady supply of blood, whenever necessary.