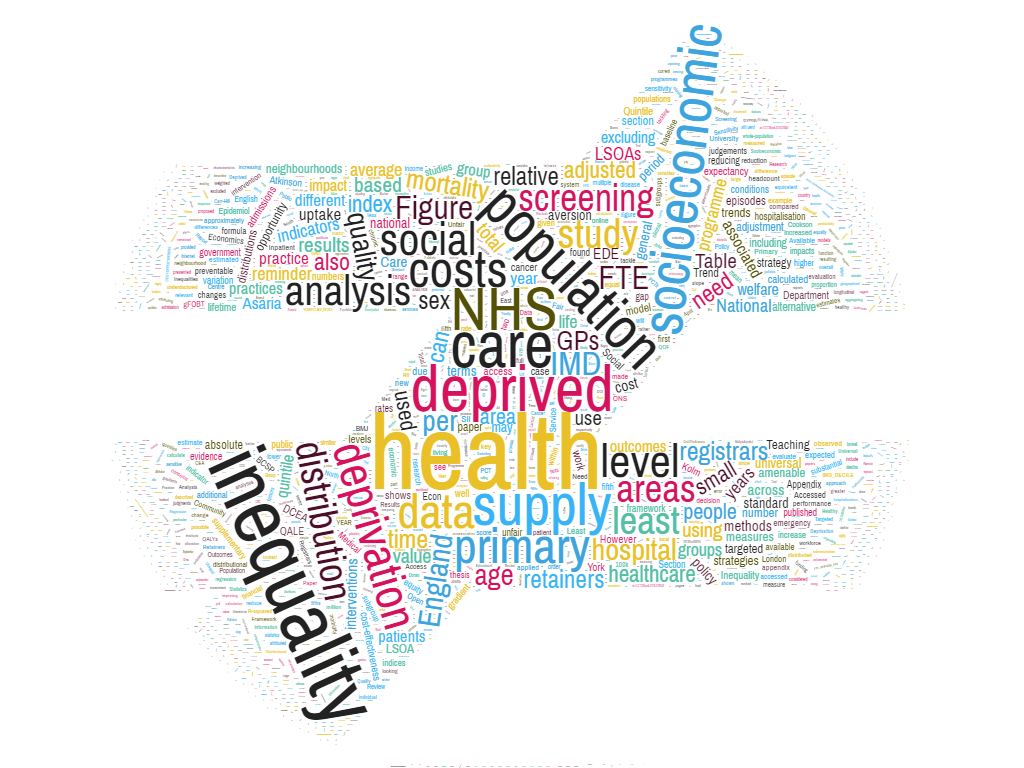 On the third Thursday of every month, we speak to a recent graduate about their thesis and their studies. This month’s guest is Dr Miqdad Asaria who graduated with a PhD from the University of York. If you would like to suggest a candidate for an upcoming Thesis Thursday, get in touch.

What types of inequality are relevant in the context of the NHS?

For me the inequalities that really matter are the inequalities in health outcomes, in the English context it is particularly the socioeconomic patterning of these inequalities that is of concern. The focus of health policy in England over the last 200 years has been on improving the average health of the population as well as on providing financial risk protection against catastrophic health expenditure. Whilst great strides have been made in improving average population health through various pioneering interventions including the establishment of the NHS, health inequality has in fact consistently widened over this period. Recent research suggests that in terms of quality-adjusted life expectancy the gap between people living in the most deprived fifth of neighbourhoods in the country as compared to those living in the most affluent fifth is now approximately 11 quality-adjusted life years.

However, these socio-economic inequalities in health typically accumulate across the life course and there is a limited amount that health care on its own can do to prevent these gaps from widening or indeed to close these gaps once they emerge. This is why health systems including the NHS typically focus on measuring and tackling the inequalities that they can influence even though eliminating such inequalities can have at best only modest impacts on reducing health inequality overall. These comprise of inequalities in access to and quality of healthcare as well as inequality of those health outcomes specifically amenable to healthcare.

What were the key methods and data that you used to identify levels of health inequality?

I am currently working on a project with the Ministry of Health and Family Welfare in India and it is really making me appreciate the amazingly detailed and comprehensive administrative datasets available to researchers in England. For the work underpinning my thesis I linked 10 years of data looking at every hospital admission and outpatient visit in the country with the quality and outcomes achieved for patients registered at each primary care practice, the number of doctors working at each primary care practice, general population census data, cause-specific mortality data, hospital cost data and deprivation data all at neighbourhood level. I spent a lot of time assembling, cleaning and linking these data sets and then used this data platform to build a range of health inequality indicators – some of which can be seen in an interactive tool I built to present the data to clinical commissioning groups.

As well as measuring inequality retrospectively in order to provide evidence to evaluate past NHS policies, and building tools to enable the NHS to monitor inequality going forward, another key focus of my thesis was to develop methods to model and incorporate health inequality impacts into cost-effectiveness analysis. These methods allow analysts to evaluate proposed health interventions in terms of their impact on the distribution of health rather than just their impact on the mythical average citizen. The distributional cost-effectiveness analysis framework I developed is based on the idea of using social welfare functions to evaluate the estimated health distributions arising from the rollout of different health care interventions and compute the equity-efficiency trade-offs that would need to be made in order to prefer one intervention over another. A key parameter in this analysis required in order to make equity-efficiency trade-offs is the level of health inequality aversion. This parameter was quite tricky to estimate with methods used to elicit it from the general public being prone to various framing effects. The preliminary estimates that I used in my analysis for this parameter suggested that at the margin the general public thought people living in the most deprived fifth of neighbourhoods in the country deserve approximately 7 times the priority in terms of health care spending as those who live in the most affluent fifth of neighbourhoods.

Does your PhD work enable us to attach a ‘cost’ to inequality, and ‘value’ to policies that reduce it?

As budding economists, we are ever cautious to distinguish association and causation. My thesis starts by estimating the cost associated with inequality to the NHS. That is the additional cost to the NHS spent on treating the excess morbidity in those living in relatively deprived neighbourhoods. I estimated the difference between the actual NHS hospital budget and what the cost would have been if everybody in the country had the morbidity profile of those who live in just the most affluent fifth of neighbourhoods. For inpatient hospital costs this difference came to £4.8 billion per year and widening this to all NHS costs this came to £12.5 billion per year approximately a fifth of the total NHS budget. I looked both cross-sectionally and also modelled lifetime estimated health care use and found that even over their entire lifetimes people living in more deprived neighbourhoods consumed more health care despite their substantially shorter life expectancies.

This cost is of course very different to the value of policies to reduce inequality. This difference arises for two main reasons. First, my estimates were not causal but rather associations so we are unable to conclude that reducing socioeconomic inequality would actually result in everybody in the country gaining the morbidity profile of those living in the most affluent fifth of neighbourhoods. Second and perhaps more significantly, my estimates do not value any of the health benefits that would result from reducing health inequality they just count the costs that could be saved by the NHS due to the excess morbidity avoided. The value of these health benefits forgone in terms of quality adjusted life years gained would have to be converted into monetary terms using an estimate of willingness to pay for health and added to these cost savings (which themselves would need to be converted to consumption values) to get a total value of reducing inequality from a health perspective. There would also, of course, be a range of non-health impacts of reducing inequality that would need to be accounted for if this exercise were to be comprehensively conducted.

In simple terms, if the causal link between socioeconomic inequality and health could be determined then the value to the health sector of policies that could substantially reduce this inequality would likely be far greater than the costs quoted here.

How did you find the PhD-by-publication route? Would you recommend it?

I came to academia relatively late having previously worked in both the government and the private sector for a number of years. The PhD by publication route suited me well as it allowed me to get stuck into a number of projects, work with a wide range of academics and build an academic career whilst simultaneously curating a set of papers to submit as a thesis. However, it is certainly not the fastest way to achieve PhD status, my thesis took 6 years to compile. The publication route is also still relatively uncommon in England and I found both my supervisors and examiners somewhat perplexed about how to approach it. Additionally, my wife who did her PhD by the traditional route assures me that it is not a ‘proper’ PhD!

For those fresh out of an MSc programme the traditional route probably works well, giving you the opportunity to develop research skills and focus on one area in depth with lots of guidance from a dedicated supervisor. However, for people like me who probably would never have got around to doing a traditional PhD, it is nice that there is an alternative way to acquire the ‘Dr’ title which I am finding confers many unanticipated benefits.

What advice would you give to a researcher looking to study health inequality?

The most important thing that I have learnt from my research is that health inequality, particularly in England, has very little to do with health care and everything to do with socioeconomic inequality. I would encourage researchers interested in this area to look at broader interventions tackling the social determinants of health. There is lots of exciting work going on at the moment around basic income and social housing as well as around the intersection between the environment and health which I would love to get stuck into given the chance.