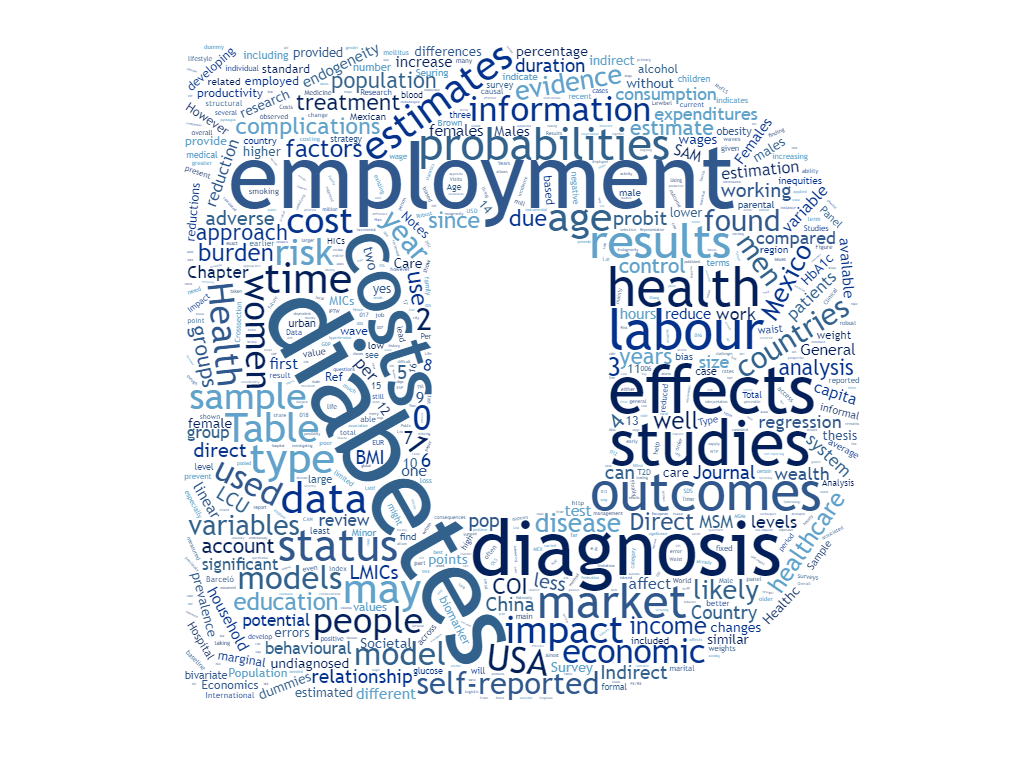 On the third Thursday of every month, we speak to a recent graduate about their thesis and their studies. This month’s guest is Dr Till Seuring who graduated with a PhD from the University of East Anglia. If you would like to suggest a candidate for an upcoming Thesis Thursday, get in touch.

What made you want to study the economics of diabetes?

I was diagnosed with type 1 diabetes when I was 18. So while looking for a topic for my master’s thesis in development economics, I was wondering about how big of a problem diabetes – in particular, type 2 diabetes – would be in low- and middle-income countries (LMICs), because I had never heard about it during my studies. Looking for data I found some on Mexico, where, as it turned out, diabetes was a huge problem and ended up writing my master’s thesis on the labour market effects of diabetes in Mexico. After that, I worked at the International Diabetes Federation as a health economist in a junior position for about a year and a half and at one of their conferences met Prof Marc Suhrcke, who is doing a lot of global health and non-communicable disease related work. We stayed in contact and in the end he offered me the possibility to pursue a PhD on diabetes in LMICs. So this is how I ended up at the University of East Anglia in Norwich studying the economics of diabetes.

Which sources of data did you use for your analyses, and how was your experience of using them?

I exclusively used household survey data that was publicly available. In my master’s thesis, I had already worked with the Mexican Family Life Survey, which is quite an extensive household survey covering many socioeconomic as well as health-related topics. I ended up using it for two of my thesis chapters. The nice thing about it is that it has a panel structure now with three waves, and the last waves also included information on HbA1c levels – a biomarker used to infer on blood glucose levels over the last three months – that I could use to detect people with undiagnosed diabetes in the survey. The second source of data was the China Health and Nutrition Survey, which has many of the same qualities, with even more waves of data. There are more and more surveys with high-quality data coming out so it will be exciting to explore them further in the future.

How did you try to identify the effects of diabetes as separate from other influences?

As in many other fields, there is great worry that diabetes might be endogenous when trying to investigate its relationship with economic outcomes. For example, personal characteristics (such as ambition) could affect your likelihood to be employed or your wage, but maybe also your exercise levels and consequently your risk to develop diabetes. Unfortunately, such things are very difficult to measure so that they often remain unobserved. Similarly, changes in income or job status could affect lifestyles that in turn could change the risk to develop diabetes, making estimates prone to selection biases and reverse causality. To deal with this, I used several strategies. In my first paper on Mexico, I used a commonly used instrumental variable strategy. My instrument was parental diabetes and we argued that, given our control variables, it was unrelated to employment status but predicted diabetes in the children due to the genetic component of diabetes. In the second paper on Mexico, I used fixed effects estimation to control for any time-invariant confounding. This strategy does not need an instrument, however, unobserved time-variant confounding or reverse causality may still be a problem. I tackled the latter in my last paper on the effect of diabetes on employment and behavioural outcomes in China, using a methodology mainly used in epidemiology called marginal structural models, which uses inverse probability weighting to account for the selection into diabetes on previous values of the outcomes of interest, e.g. changes in employment status or weight. Of course, in the absence of a true experiment, it still remains difficult to truly establish causality using observational data, so one still needs to be careful to not over-interpret these findings.

The focus of your PhD was on middle-income countries. Does diabetes present particular economic challenges in this setting?

Well, over the last 30 years many middle-income countries, especially in Asia but also Latin America, have gone from diabetes rates much below high-income countries to surpassing them. China today has about 100 million people with diabetes, sporting the largest diabetes population worldwide. While, as countries become richer, first the economically better-off populations tend to have a higher diabetes prevalence, in many middle-income countries diabetes is now affecting, in particular, the middle class and the poor, who often lack the financial resources to access treatment or to even be diagnosed. Consequently, many remain poorly treated and develop diabetes complications that can lead to amputations, loss of vision and cardiovascular problems. Once these complications appear, the associated medical expenditures can represent a very large economic burden, and as I have shown in this thesis, can also lead to income losses because people lose their jobs.

What advice would you give to policymakers looking to minimise the economic burden of diabetes?

The policy question is always the most difficult one, but I’ll try to give some answers. The results of the thesis suggest that there is a considerable economic burden of diabetes which disproportionately affects the poor, the uninsured and women. Further, many people remain undiagnosed and some of the results of the biomarker analysis I conducted in one of my papers suggest that diagnosis likely often happens too late to prevent adverse health outcomes. Therefore, earlier diagnosis may help to reduce the burden, the problem is that once people are diagnosed they will also need treatment, and it appears that even now many do not receive appropriate treatment. Therefore, simply aiming to diagnose more people will not be sufficient. Policymakers in these countries will need to make sure that they will also be able to offer treatment to everybody, in particular the disadvantaged groups. Otherwise, inequities will likely become even greater and healthcare systems even more overburdened. How this can be achieved is another question and more research will be needed. Promising areas could be a greater integration of diabetes treatment into the existing health care systems specialised in treating communicable diseases such as tuberculosis, which often are related to diabetes. This would both improve treatment and likely limit the amount of additional costs. Of course, investments in early life health, nutrition and education will also help to reduce the burden by improving health and thereby economic possibilities, so that people may never become diabetic or at least have better possibilities to cope with the disease.