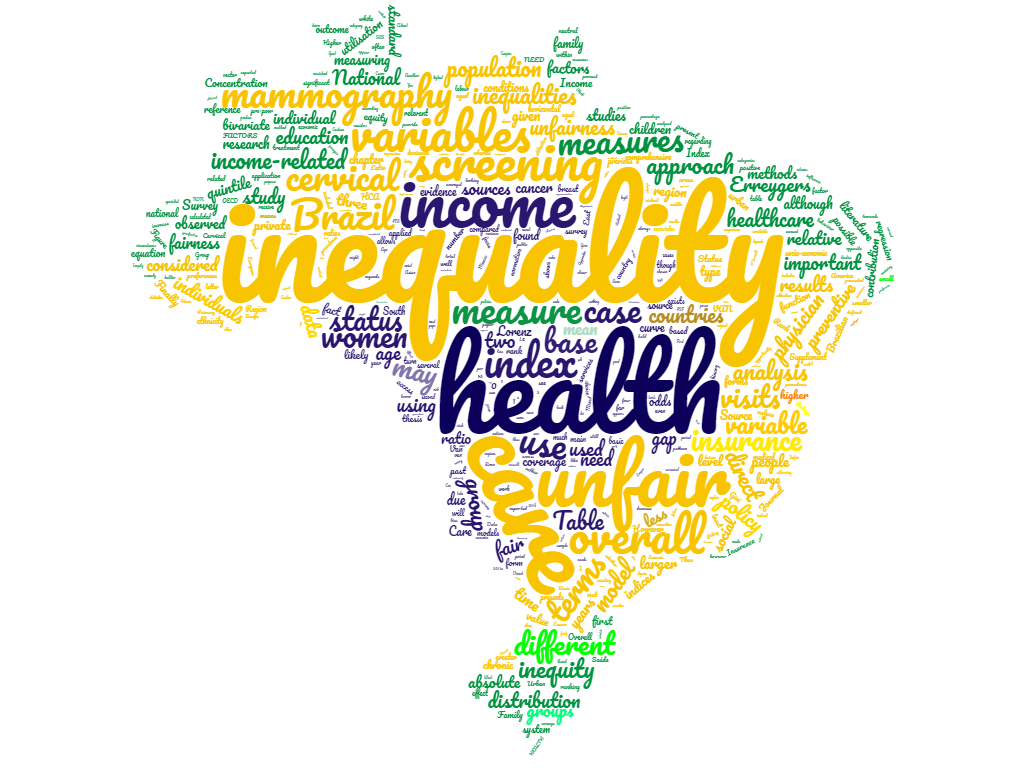 On the third Thursday of every month, we speak to a recent graduate about their thesis and their studies. This month’s guest is Dr Estela Capelas Barbosa who graduated with a PhD from the University of York. If you would like to suggest a candidate for an upcoming Thesis Thursday, get in touch.

What’s the difference between fair and unfair inequality, and why is it important to distinguish the two?

Not all inequality is the same. Whilst most inequality in health and health care is unwanted, one could argue that some inequality is even desirable. For example, we all agree that women should receive more care than men because they have a higher need for health care. The same argument could be used for children. Therefore, when looking into inequality, from a philosophical point of view, it is important to distinguish between inequality that is deemed fair (as in my women’s example) and that considered unfair. But there is a catch! Because ‘fair’ and ‘unfair’ are normative value judgements, different people may have different views as to what is fair or unfair. That’s why, in the thesis, I worked hard to come up with a framework that was flexible enough to allow for different views of fair and unfair.

Your thesis describes a novel way of thinking about inequality. What led you to believe that other conceptualisations were inadequate?

Previously, inequality in health care was either dealt with in overall terms, using a Gini coefficient type of analysis, or focused on income and socioeconomic inequality (see Wagstaff and Van Doorslaer, 2004). As a field researcher in Brazil, I had first-hand experience that there was more to unfair inequality than income. I remember personally meeting a very wealthy man that had many difficulties in accessing the healthcare system simply because he lived in a very remote rural area of the country. I wanted to better understand this and look beyond income to explain inequality in Brazil. Thus, neither of the well-established methods seemed really appropriate for my analysis. I knew I could adjust my Gini for need, but this type of analysis did not explicitly allow for a distinction between unfair and fair inequality. At the other extreme, income-related inequality was just a very narrow definition of unfairness. Although the established methods were my starting point, I agreed with Fleurbaey and Schokkaert that there could be yet another way of looking at inequality in health care, and I drew inspiration from their proposed method for health and made adjustments and modifications for the application to health care.

What were some of your key findings about the sources of inequality, and how were they measured in your data?

I guess my most important finding is that the sources of unfair inequality have changed between 1998 and 2013. For example, the contribution of income to unfair inequality decreased in this time for physician visits and mammography screening, yet for cervical screening it nearly doubled between 2003 and 2013. I have also found that there are other sources of inequality which are important (sometimes even more than income), as for example having private health insurance, education, living in urban areas and region.

As to my data, it came from Health Supplement of the Brazilian National Household Sample Survey for the years 1998, 2003 and 2008 and the first National Health Survey, conducted in 2013 (see www.ibge.gov.br). The surveys use standardised questionnaires and rely on self-report for most questions, particularly those related to health care coverage and health status.

Your analysis looks at a relatively long period of time. What can you tell us about long-term trends in Brazil?

It is difficult to talk about long-term trends in Brazil at the moment. Our (universal) healthcare system has only been in place since 1988 and, since the last wave of data (in 2013), there has been a strong political movement to dismantle the national system and sell it to the private sector. I guess the movement to reduce and/or privatise the NHS also exists here, but, unlike in the UK, our national system has always been massively under-resourced, so it is not as highly-regarded by the population.

Having said that, it is fair to say that in its first 25 years of existence, Brazil has accomplished a lot in terms of healthcare (I have described – in Portuguese – some of the achievements and challenges). The Brazilian National Health System covers over 200 million people and accounts for nearly 500 thousand hospital beds. In terms of inequality, over time, it has decreased for physician visits and cervical screening, though for mammography there is no clear trend.

What would you like to see policymakers in Brazil prioritise in respect to reducing inequality?

First and foremost, I would like policymakers to understand that over three-quarters of the Brazilian population relies on the national system as their one and only health care provider. Second, I would like to reinforce the idea that social inequality in health care in Brazil is not only and indeed not primarily related to income. In fact, other social variables such as education, region, urban or rural residency and health insurance status are as important or even more important than income. This implies that there are supply side actions that can be taken, which should be much easier to implement. For example, more health care equipment, such as MRIs and CT scanners could be purchased for the North and Northeast regions. This could potentially reduce unfair inequality. Policies can also be directed at improving access to care in rural regions, although this factor is not as important a contributor to inequality as it used to be. I guess the overall message is: there are several things that can be done to reduce unfair inequality in Brazil, but all depend on political will and understanding the importance of the healthcare system for the health of the population.