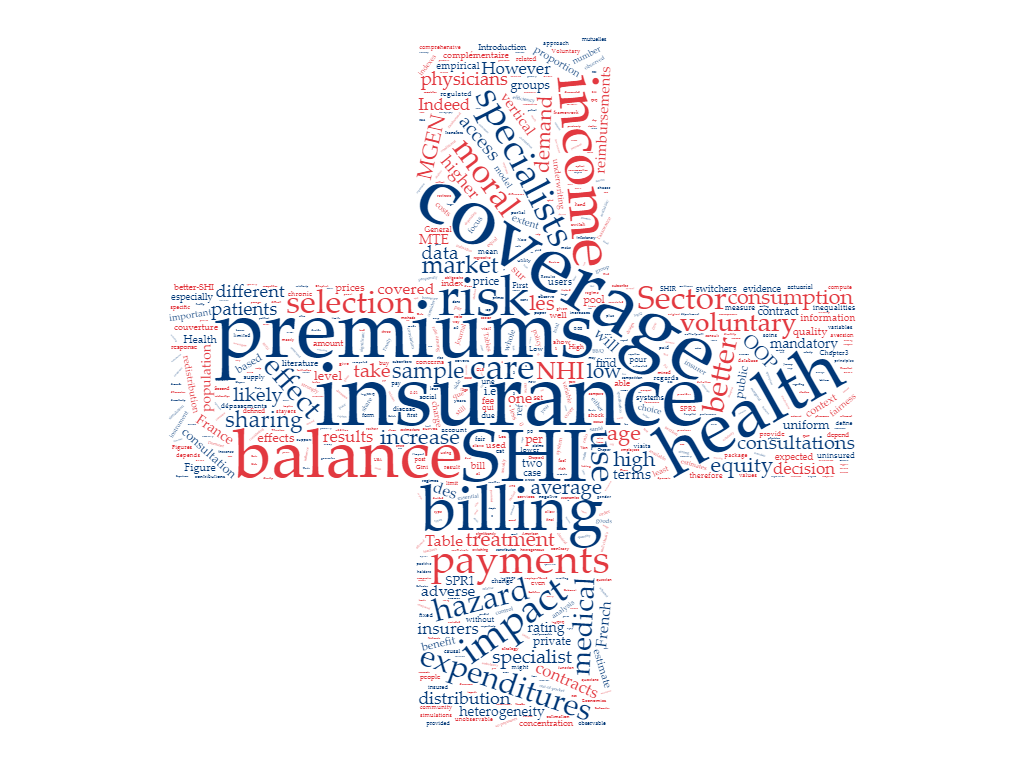 On the third Thursday of every month, we speak to a recent graduate about their thesis and their studies. This month’s guest is Dr Mathilde Péron who graduated with a PhD from Université Paris Dauphine. If you would like to suggest a candidate for an upcoming Thesis Thursday, get in touch.

How important is supplementary health insurance in France, compared with other countries?

In France in 2016, Supplementary Health Insurance (SHI) financed 13.3% of total health care expenditure. SHI supplements a partial mandatory coverage by covering co-payments as well as medical goods and services outside the public benefit package, such as dental and optical care or balance billing. SHI is not a French singularity. Canada, Austria, Switzerland, the US (with Medicare / Medigap) or the UK do offer voluntary SHI contracts. A remarkable fact, however, is that 95% of the French population is covered by a SHI contract. In comparison, although the extent of public coverage is very similar in France and in the UK, the percentage of British patients enrolled in a private medical insurance is below 15%.

The large SHI enrolment and the subsequent limited out-of-pocket payments – €230 per year on average, the lowest among EU countries – should not hide important inequalities in the extent of coverage and premiums paid. SHI coverage is now mandatory for employees of the private sector. They benefit from subsidized contracts and uniform premiums. Individuals with an annual income below €8,700 benefit from free basic SHI coverage which covers copayments, essentially. However, the rest of the population (students, temporary workers, unemployed, retirees, independent, and civil servants) buy SHI in a competitive market where premiums generally increase with age.

Competitive health insurance markets are subject to asymmetric information that prevent the existence of pooling contracts (Rothschild and Stiglitz, 1976; Cutler and Zeckhauser, 1998). The US market is a good example; in the 1950s not-for-profit insurance companies (Blue Cross, Blue Shields) – which offered pooled contracts – almost all disappeared (Thomasson, 2002). And, despite a notably higher public coverage that could limit adverse selection effects, the French SHI market is not an exception.

Historically, SHI coverage was provided by not-for-profit insurers, the Mutuelles, who relied on solidarity principles. But as the competition becomes more intense, the Mutuelles experience the adverse selection death spiral; they lose their low-risk clients attracted by lower premiums. To survive, they have to give up on uniform premiums and standardized coverage. Today 90% of SHI contracts in the individual market have premiums that increase with age. It is worth noting that in France insurers have strong fiscal incentives to avoid medical underwriting, so age remains the only predictor for individual risk. Still, premiums can vary with a ratio of 1 to 3, which raises legitimate concerns about the affordability of insurance and access to health care for patients with increasing medical needs.

How does supplementary health insurance influence prices in health care, and how did you measure this in your research?

A real policy concern is that SHI might have an inflationary effect by allowing patients to consume more at higher prices. Access to specialists who balance bill (i.e. charge more than the regulated fee) – a signal for higher quality and reduced waiting times – is a good example (Dormont and Peron, 2016).

To measure the causal impact of SHI on balance billing consumption we use original individual-level data, collected from the administrative claims of a French insurer. We observe balance billing consumption and both mandatory and SHI reimbursements for 43,111 individuals from 2010 to 2012. In 2010, the whole sample was covered by the same SHI contract, which does not cover balance billing. We observe the sample again in 2012 after that 3,819 among them decided to switch to other supplementary insurers, which we assume covers balance billing. We deal with the endogeneity of the decision to switch by introducing individual effects into the specifications and by using instrumental variables for the estimation.

We find that individuals respond to better coverage by increasing their proportion of visits to a specialist who balance bills by 9%, resulting in a 32% increase in the amount of balance billing per visit. This substitution to more expensive care is likely to encourage the rise in medical prices.

Does the effect of supplementary insurance on health care consumption differ according to people’s characteristics?

An important result is that the magnitude of the impact of SHI on balance billing strongly depends on the availability of specialists. We find no evidence of moral hazard in areas where specialists who do not charge balance billing are readily accessible. On the contrary, in areas where they are scarce, better coverage is associated with a 47% increase in the average amount of balance billing per consultation. This result suggests that the most appropriate policy to contain medical prices is not necessarily to limit SHI coverage but to monitor the supply of care in order to guarantee patients a genuine choice of their physicians.

We further investigate the heterogeneous impact of SHI in a model where we specify individual heterogeneity in moral hazard and consider its possible correlation with coverage choices (Peron and Dormont, 2017 [PDF]). We find evidence of selection on moral hazard: individuals with unobserved characteristics that make them more likely to ask for comprehensive SHI show a larger increase in balance billing per visit. This selection effect is likely to worsen the inflationary impact of SHI. On the other hand, we also find that the impact of a better coverage is larger for low-income people, suggesting that SHI plays a role in access to care.

Have the findings from your PhD research influenced your own decision to buy supplementary health insurance?

As an economist, it’s interesting to reflect on your own decisions, isn’t it? Well, I master cost-benefit analysis, I have a good understanding of expected utility and definitely more information than the average consumer in the health insurance market. Still, my choice of SHI might appear quite irrational. I’m (reasonably) young and healthy, I could have easily switched to a contract with lower premiums and higher benefits, but I did not. I stayed with a contract where premiums mainly depend on income and benefits are standardized, an increasingly rare feature in the market. I guess that stresses out the importance of other factors in my decision to buy SHI, my inertia as a consumer, probably, but also my willingness to pay for solidarity.