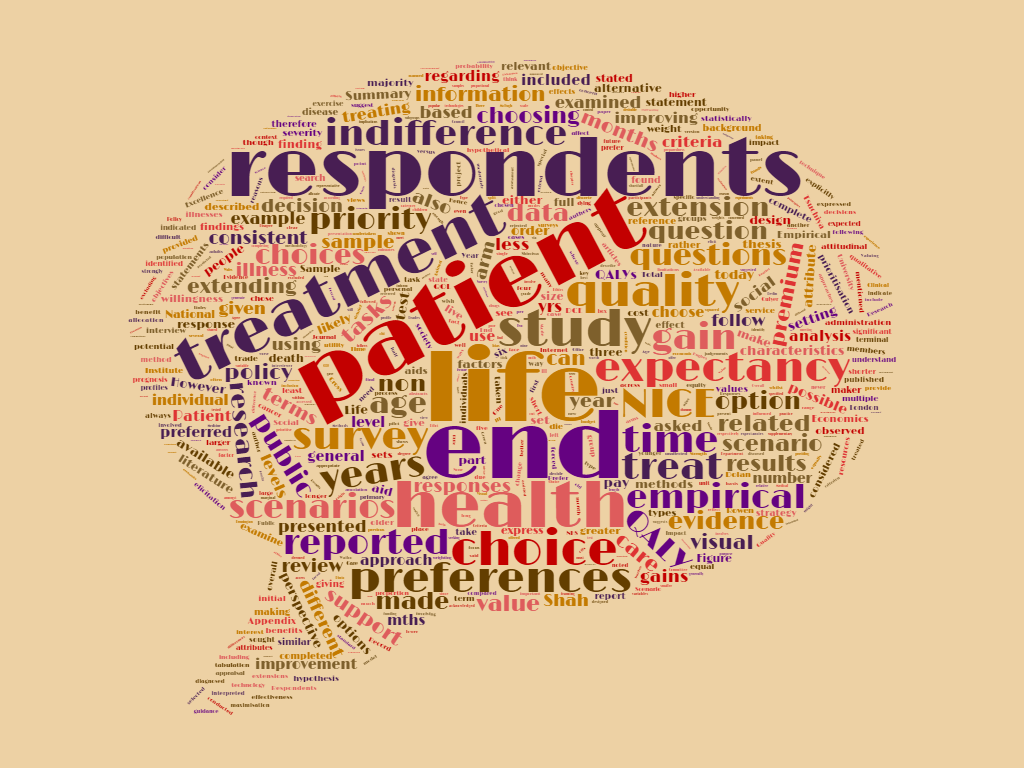 On the third Thursday of every month, we speak to a recent graduate about their thesis and their studies. This month’s guest is Dr Koonal Shah who has a PhD from the University of Sheffield. If you would like to suggest a candidate for an upcoming Thesis Thursday, get in touch.

What were the key questions you wanted to answer with your research?

My key research question was: Do members of the general public wish to place greater weight on a unit of health gain for end of life patients than on that for other types of patients? Or put more concisely: Is there evidence of public support for an end of life premium?

The research question was motivated by a policy introduced by NICE in 2009 [PDF], which effectively gives special weighting to health gains generated by life-extending end of life treatments. This represents an explicit departure from the Institute’s reference case position that all equal-sized health gains are of equal social value (the ‘a QALY is a QALY’ rule). NICE’s policy was justified in part by claims that it represented the preferences of society, but little evidence was available to either support or refute that premise. It was this gap in the evidence that inspired my research question.

I also sought to answer other questions, such as whether the focus on life extensions (rather than quality of life improvements) in NICE’s policy is consistent with public preferences, and whether people’s stated end of life-related preferences depend on the ways in which the preference elicitation tasks are designed, framed and presented.

Which methodologies did you use to elicit people’s preferences?

All four of my empirical studies used hypothetical choice exercises to elicit preferences from samples of the UK general public. NICE’s policy was used as the framework for the designs in each case. Three of the studies can be described as having used simple choice tasks, while one study specifically applied the discrete choice experiment methodology. The general approach was to ask survey respondents which of two hypothetical patients they thought should be treated, assuming that the health service had only enough funds to treat one of them.

In my final study, which focused on framing effects and study design considerations, I included attitudinal questions with Likert item responses alongside the hypothetical choice tasks. The rationale for including these questions was to examine the consistency of respondents’ views across two different approaches (spoiler: most people are not very consistent).

Your study included face-to-face interviews. Did these provide you with information that you weren’t able to obtain from a more general survey?

The surveys in my first two empirical studies were both administered via face-to-face interviews. In the first study, I conducted the interviews myself, while in the second study the interviews were subcontracted to a market research agency. I also conducted a small number of face-to-face interviews when pilot testing early versions of the surveys for my third and fourth studies. The piloting process was useful as it provided me with first-hand information about which aspects of the surveys did and did not work well when administered in practice. It also gave me a sense of how appropriate my questions were. The subject matter – prioritising between patients described as having terminal illnesses and poor prognoses – had the potential to be distressing for some people. My view was that I shouldn’t be including questions that I did not feel comfortable asking strangers in an interview setting.

The use of face-to-face interviews was particularly valuable in my first study as it allowed me to ask debrief questions designed to probe respondents and elicit qualitative information about the thinking behind their responses.

What factors influence people’s preferences for allocating health care resources at the end of life?

My research suggests that people’s preferences regarding the value of end of life treatments can depend on whether the treatment is life-extending or quality of life-improving. This is noteworthy because NICE’s end of life criteria accommodate life extensions but not quality of life improvements.

I also found that the amount of time that end of life patients have to ‘prepare for death’ was a consideration for a number of respondents. Some of my results suggest that observed preferences for prioritising the treatment of end of life patients may be driven by concern about how long the patients have known their prognosis rather than by concern about how long they have left to live, per se.

The wider literature suggests that the age of the end of life patients (which may act as a proxy for their role in their household or in society) may also matter. Some studies have reported evidence that respondents become less concerned about the number of remaining life years when the patients in question are relatively old. This is consistent with the ‘fair innings’ argument proposed by Alan Williams.

Given the findings of your study, are there any circumstances under which you would support an end of life premium?

My findings offer limited support for an end of life premium (though it should be noted that the wider literature is more equivocal). So it might be considered appropriate for NICE to abandon its end of life policy on the grounds that the population health losses that arise due to the policy are not justified by the evidence on societal preferences. However, there may be arguments for retaining some form of end of life weighting irrespective of societal preferences. For example, if the standard QALY approach systematically underestimates the benefits of end of life treatments, it may be appropriate to correct for this (though whether this is actually the case would itself need investigating).

Many studies reporting that people wish to prioritise the treatment of the severely ill have described severity in terms of quality of life rather than life expectancy. And some of my results suggest that support for an end of life premium would be stronger if it applied to quality of life-improving treatments. This suggests that weighting QALYs in accordance with continuous variables capturing quality of life as well as life expectancy may be more consistent with public preferences than the current practice of applying binary cut-offs based only on life expectancy information, and would address some of the criticisms of the arbitrariness of NICE’s policy.