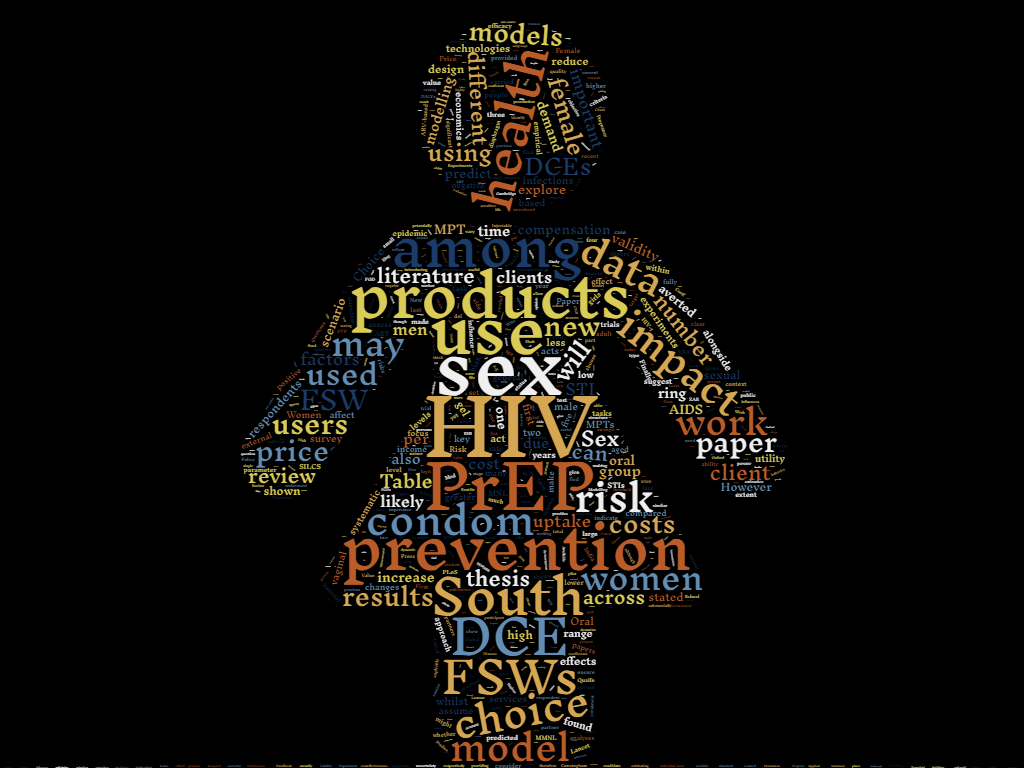 On the third Thursday of every month, we speak to a recent graduate about their thesis and their studies. This month’s guest is Dr Matthew Quaife who has a PhD from the London School of Hygiene and Tropical Medicine. If you would like to suggest a candidate for an upcoming Thesis Thursday, get in touch.

Stated preferences for what?

Our main study looked at preferences for new HIV prevention products in South Africa – estimating the uptake and cost-effectiveness of multi-purpose prevention products, which protect against HIV, pregnancy and STIs. You’ll notice that condoms do this, so why even bother? Condom use needs both partners to agree (for the duration of a given activity) and, whilst female partners tend to prefer condom-protected sex, there is lots of evidence that male partners – who also have greater bargaining power in many contexts – do not.

Oral pre-exposure prophylaxis (PrEP), microbicide gels, and vaginal rings are new products which prevent HIV infection. More importantly, they are female-initiated and can generally be used without a male partner’s knowledge. But trials and demonstration projects among women at high risk of HIV in sub-Saharan Africa have shown low levels of uptake and adherence. We used a DCE to inform the development of attractive and usable profiles for these products, and also estimate how much additional demand – and therefore protection – would be gained from adding contraceptive or STI-protective attributes.

We also elicited the stated preferences of female sex workers for client risk, condom use, and payments for sex. Sex workers can earn more for risky unprotected sex, and we used a repeated DCE to predict risk compensation (i.e. how much condom use would change) if they were to use HIV prevention products.

What did you find most influenced people’s preferences in your research?

Unsurprisingly for products, HIV protection was most important to people, followed by STI and then pregnancy protection. But digging below these averages with a latent class analysis, we found some interesting variation within female respondents: over a third were not concerned with HIV protection at all, instead strongly caring about pregnancy and STI protection. Worryingly, these were more likely to be respondents from high-incidence adolescent and sex worker groups. The remainder of the sample overwhelmingly chose based on HIV protection.

In the second sex worker DCE, we found that using a new HIV prevention product made condoms become less important and price more important. We predict that the price premium for unprotected sex would reduce by two thirds, and the amount of condomless sex would double. This is an interesting labour market/economic finding, but – if true – also has real public health implications. Since economic changes mean sex workers move from multi-purpose condoms to single-purpose products which need high levels of adherence, we thought this would be interesting to model.

How did you use information about people’s preferences to inform estimates of cost-effectiveness?

In two ways. First, we used simple uptake predictions from DCEs to parameterise an HIV transmission model, allowing for condom substitution uptake to vary by condom users and non-users (it was double in the latter). We were also able to model the potential uptake of multipurpose products which don’t exist yet – e.g. a pill protecting from HIV and pregnancy. We predict that this combination, in particular, would double uptake among high-risk young women.

Second, we predicted risk compensation among sex workers who chose new products instead of condoms. We were also able to calculate the price elasticity of supply of unprotected sex, which we built into a dynamic transmission model as a determinant of behaviour.

Can discrete choice experiments accurately predict the kinds of behaviours that you were looking at?

To be honest, when I started the PhD I was really sceptical – and I still am to an extent. But two things make me think DCEs can be useful in predicting behaviours.

First is the data. We published a meta-analysis of how well DCEs predict real-world health choices at an individual level. We only found six studies with individual-level data, but these showed DCEs predict with an 88% sensitivity but just a 34% specificity. If a DCE says you’ll do something, you more than likely will – which is important for modelling heterogeneity in uptake. We desperately need more studies following up DCE participants making real-world choices.

Second is the lack of alternative inputs. Where products are new and potential users are inexperienced, modellers pick an uptake number/range and hope for the best. Where we don’t know efficacy, we may assume that uptake and efficacy are linearly related – but they may not be (e.g. if proportionately more people use a 95% effective product than a 45% effective one). Instead, we might assume uptake and efficacy are independent, but that might sound even less realistic. I think that DCEs can tell us something about these behaviours that are useful for the parameters and structures of models, even if they are not perfect predictors.

Your tread the waters of infectious disease modelling in your research – was the incorporation of economic factors a challenge?

It was pretty tricky, though not as challenging as building the simple dynamic transmission model as a first exposure to R. In general, behaviours are pretty crudely modelled in transmission models, largely due to assumptions like random mixing and other population-level dynamics. We made a simple mechanistic model of sex work based on the supply elasticities estimated in the DCE, and ran a few scenarios, each time estimating the impact of prevention products. We simulated the price of unprotected sex falling and quantity rising as above, but also overlaid a few behavioural rules (e.g. Camerer’s constant income hypothesis) to simulate behavioural responses to a fall in overall income. Finally, we thought about competition between product users and non-users, and how much the latter may be affected by the market behaviours of the former. Look out for the paper at Bristol HESG!

How would you like to see research build on your work to improve HIV prevention?

I did a public engagement event last year based on one statistic: if you are a 16-year old girl living in Durban, you have an 80% lifetime risk of acquiring HIV. I find it unbelievable that, in 2018, when millions have been spent on HIV prevention and we have a range of interventions that can prevent HIV, incidence among some groups is still so dramatically and persistently high.

I think research has a really important role in understanding how people want to protect themselves from HIV, STIs, and pregnancy. In addition to highlighting the populations where interventions will be most cost-effective, we show that variation in preferences drives impact. I hope we can keep banging the drum to make attractive and effective options available to those at high risk.