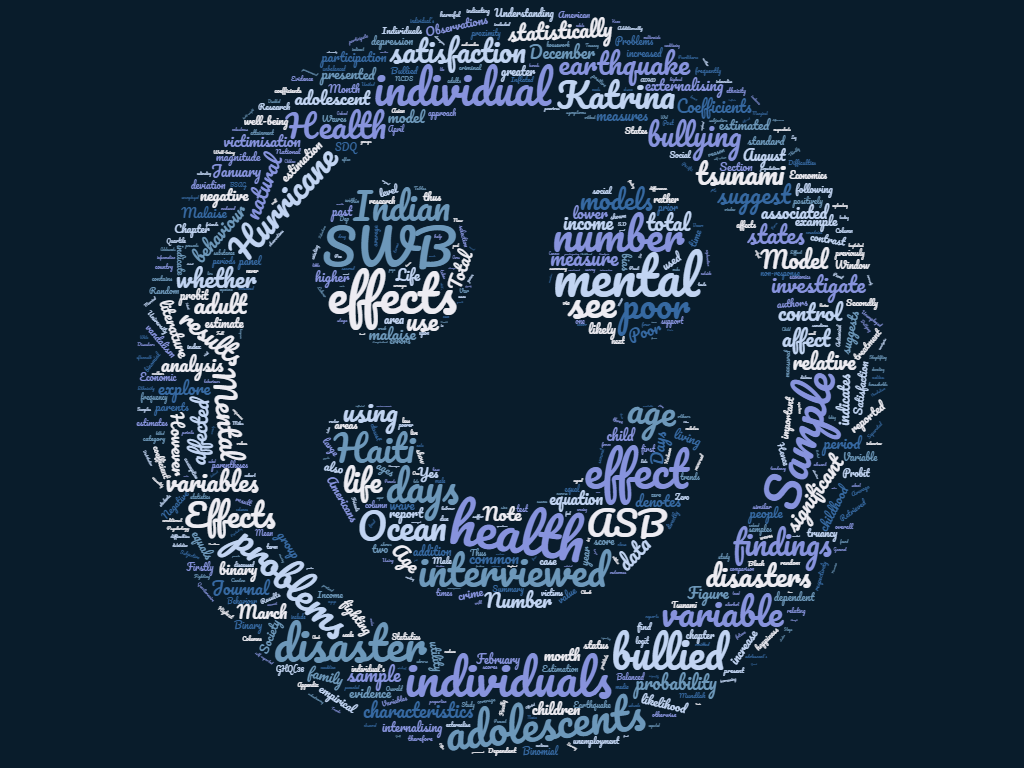 On the third Thursday of every month, we speak to a recent graduate about their thesis and their studies. This month’s guest is Dr James Oswald who has a PhD from the University of Sheffield. If you would like to suggest a candidate for an upcoming Thesis Thursday, get in touch.

What measures of health did you use in your research and how did these complement broader measures of well-being?

I didn’t use any measures of physical health. I used a few measures of subjective well-being (SWB) and mental health which vary across the chapters. In Chapter 2 I used life satisfaction and the Rutter Malaise Inventory. Life satisfaction is a global retrospective judgement of one’s life and is a measure of evaluative well-being (see Dolan and Metcalfe, 2012). The Rutter Malaise Inventory, a measure of affective well-being, is an index that is composed of 9 items that measure the respondent’s symptoms of psychological distress or depression. The measure of the mental health problems of adolescents that is used in Chapter 3 is the Strengths and Difficulties Questionnaire (SDQ). The SDQ is made up of four 5-item subscales: emotional problems, peer relationship problems, conduct problems, and hyperactivity/ inattention problems. Chapter 3 utilises the General Health Questionnaire (GHQ) as a measure of the mental health of parents. The GHQ is a screening instrument that was initially developed to diagnose psychiatric disorders. Chapter 4 utilises one measure of subjective well-being, which relates to the number of days of poor self-reported mental health (stress, depression, and problems with emotions) in the past 30 days.

Did your research result in any novel findings regarding the social determinants of mental well-being?

The findings of Chapter 2 suggested that bullying victimisation at age 11 has a large, adverse effect on SWB as an adult. Childhood bullying remains prevalent – recent estimates suggest that approximately 20-30% of children are bullied by other children. The evidence provided in Chapter 3 indicated that greater externalising problems of adolescents are positively associated with the likelihood that they engage in antisocial behaviour. Chapter 4 indicated two important findings. Firstly, Hurricane Katrina had a negative effect on the SWB of individuals living in the states that were directly affected by the disaster. Secondly, the analysis suggested that the Indian Ocean tsunami and the Haiti earthquake increased the SWB of Americans living closest to the affected areas.

My thesis presents evidence to suggest that their impact depends upon whether you live in the disaster area. I explored the role of geography by exploring the effects of three disasters – hurricane Katrina in 2005 (USA), Indian Ocean tsunami in 2004 (East Asia), and the Haiti earthquake in 2010. Firstly, Hurricane Katrina had a negative effect on the SWB of individuals living in the states that were directly affected by the disaster. As a result, the findings suggest that government intervention in the aftermath of disasters is needed to help mitigate the adverse effects of natural disasters on the SWB of people who live in the directly affected areas. For example, appropriate mental health services and counselling could be offered to people suffering unhappiness or distress. Secondly, the analysis suggested that the Indian Ocean tsunami and the Haiti earthquake increased the SWB of Americans living closest to the affected areas. This surprising finding may be explained by the interdependence of utility functions. Following the disasters, Americans were exposed to widespread coverage of the disasters via social and traditional media sources. Because of the media coverage, they may have thought about the catastrophic repercussions of the disasters for the victims. Consequently, Americans who lived closest to the affected areas may have compared themselves to the disaster victims, leading them to feel thankful that the disaster did not affect them, thus increasing their SWB.

The empirical results support the case that the utility functions of strangers may be interdependent, rather than independent, an assumption generally made in economics. Furthermore, the findings indicated no evidence that the effects of the disasters were more pronounced for individuals of the same ethnicity as the disaster victims. The results therefore suggest that geographical proximity to the affected areas, rather than sharing similar characteristics with the disaster victims, may determine the effects of natural disasters on SWB outside of the areas that were directly affected by the disasters. This issue is discussed in greater detail in Chapter 4 of my thesis.

How did you go about identifying some of the consequences of mental health problems?

My thesis uses a range of econometric methods to explore the determinants and consequences of mental health and subjective well-being. In Chapter 2 – for childhood bullying and adult subjective well-being – I used a range of methods including random effects ordered probit models, Hausman tests, and Heckman models. Chapter 3 investigates how the mental health of adolescents affects their participation in antisocial behaviour. The analysis uses random effects probit, multivariate probit, and conditional logit models. Chapter 4 investigates the effects of three natural disasters on subjective well-being in the USA. The chapter uses difference-in-differences methodology with a count data model called a zero-inflated negative binomial model.

Are there any policy recommendations that you would make in light of your research?

Chapter 2 suggests that being bullied as a child adversely affects subjective well-being as an adult. My analysis supports the case that preventing children bullying in schools may have a positive effect on the SWB of a large percentage of the adult population. Chapter 3 indicated that greater externalising problems of adolescents are positively associated with the likelihood that they engage in antisocial behaviour. Previous research has suggested that adolescents who commit antisocial behaviour have an increased probability of committing crime as adults. Consequently, the findings suggest that mental health interventions to target the externalising problems of adolescents may reduce future crime. The findings also suggest that the money spent on the “Troubled Families” programme may be spent more cost-effectively in reducing antisocial behaviour by expanding access to mental health interventions for adolescents, such as via the Improving Access to Psychological Therapies programme.

The findings of Chapter 4 suggest that government intervention in the aftermath of disasters is needed to help mitigate the adverse effects of natural disasters on the SWB of people who live in the directly affected areas. For example, appropriate mental health services and counselling could be offered to people suffering unhappiness or distress because of natural disasters.