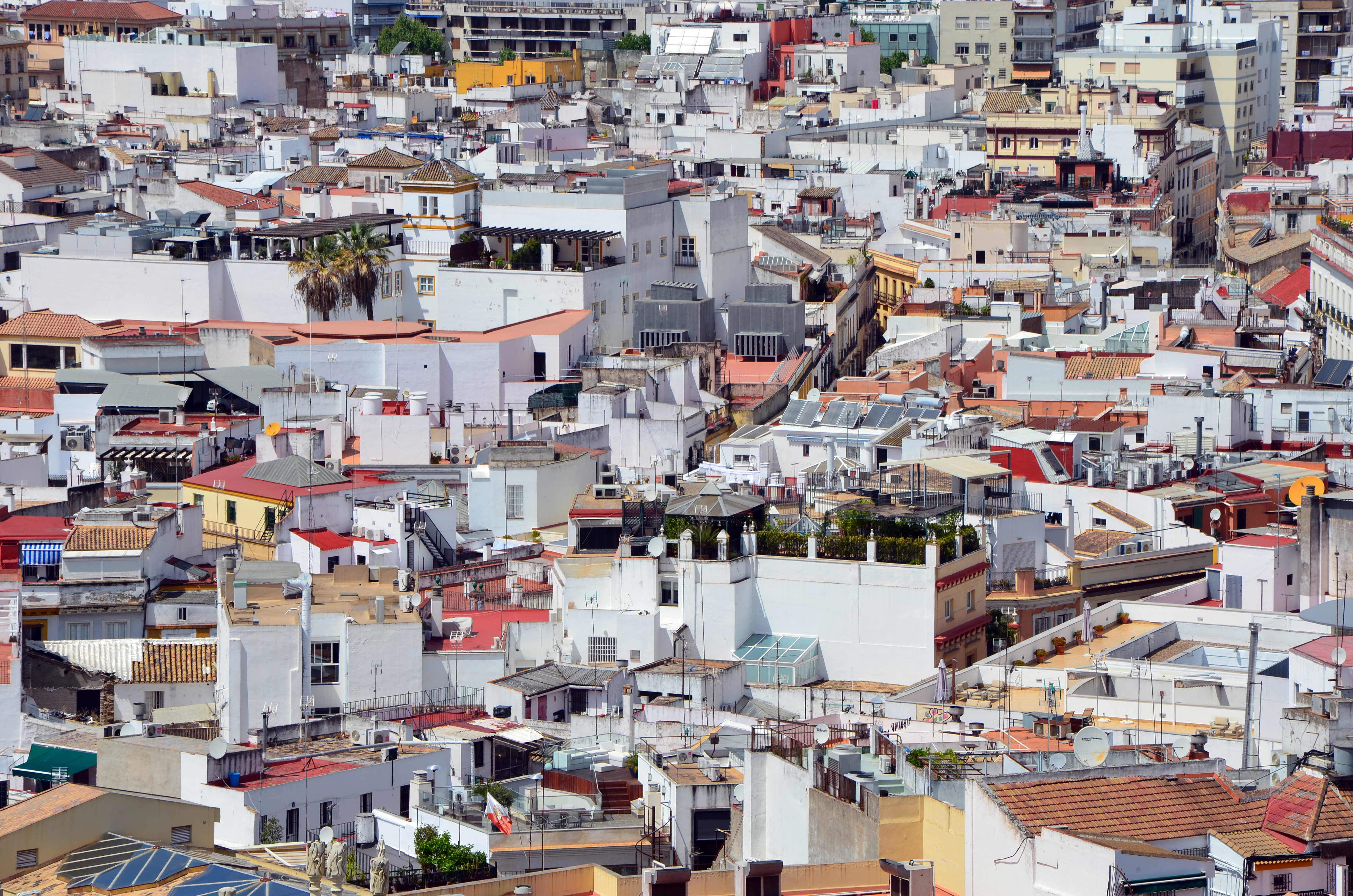 When we think of the causal effect of living in one neighbourhood compared to another we think of how the social interactions and lifestyle of that area produce better outcomes. Does living in an area with more obese people cause me to become fatter? (Quite possibly). Or, if a family moves to an area where people earn more will they earn more? (Read on).

In a previous post, we discussed such effects in the context of slums, where the synergy of poor water and sanitation, low quality housing, small incomes, and high population density likely has a negative effect on residents’ health. However, we also discussed how difficult it is to estimate neighbourhood effects empirically for a number of reasons. On top of this, are the different ways neighbourhood effects can manifest. Social interactions may mean behaviours that lead to better health or incomes rub off on one another. But also there may be some underlying cause of the group’s, and hence each individual’s, outcomes. In the slum, low education may mean poor hygiene habits spread, or the shared environment may contain pathogens, for example. Both of these pathways may constitute a neighbourhood effect, but both imply very different explanations and potential policy remedies.

What should we make then of, not one, but two new articles by Raj Chetty and Nathaniel Henderen in the recent issue of Quarterly Journal of Economics? Both of which use observational data to estimate neighbourhood effects.

Paper 1: The Impacts of Neighborhoods on Intergenerational Mobility I: Childhood Exposure Effects.

The authors have an impressive data set. They use federal tax records from the US between 1996 and 2012 and identify all children born between 1980 and 1988 and their parents (or parent). For each of these family units they determine household income and then the income of the children when they are older. To summarise a rather long exegesis of the methods used, I’ll try to describe the principle finding in one sentence:

They interpret this as the outcomes of in-migrating children ‘converging’ to the outcomes of permanently resident children at a rate of 4% per year. That should provide an idea of how the outcomes and treatments were defined, and who constituted the sample. The paper makes the assumption that the effect is the same regardless of the age of the child. Or to perhaps make it a bit clearer, the claim can be interpreted as that human capital, H, does something like this (ignoring growth over childhood due to schooling etc.):

The analyses also take account of parental income at the time of the move and looks at families who moved due to a natural disaster or other ‘exogenous’ shock. The different analyses generally support the original estimate putting the result in the region of 0.03 to 0.05 percentile points.

But are these neighbourhood effects?

A different way of interpreting these results is that there is an underlying effect driving incomes in each area. Areas with higher incomes for their children in the future are those that have a higher market price for labour in the future. So we could imagine that this is what is going on with human capital instead:

This is the those moving to areas where people will earn more in the future, also earn more in the future because of differences in the labour market hypothesis. The Bureau of Labour Statistics, for example, cites the wage rate for a registered nurse as $22.61 in Iowa and $36.13 in California. But we can’t say from the data whether the children are sorting into different occupations or are getting paid different amounts for the same occupations.

Manksi (1993) called the issue the ‘reflection problem’, which he described as arising when

a researcher observes the distribution of a behaviour in a population and wishes to infer whether the average behaviour in some group influences the behaviour of the individuals that compose the group.

What we have here is a linear-in-means model estimating the effect of average incomes on individual incomes. But what we cannot distinguish between is the competing explanations of, what Manski called, endogenous effects that result from the interaction  with families with higher incomes, and correlated effects that lead to similar outcomes due to exposure to the same underlying latent forces, i.e. the market. We could also add contextual effects that manifest due to shared group characteristics (e.g. levels of schooling or experience). When we think of a ‘neighbourhood effect’ I tend to think of them as of the endogenous variety, i.e. the direct effects of living in a certain neighbourhood. For example, under different labour market conditions, both my income and the average income of the permanent residents of the neighbourhood I move to might be lower, but not because of the neighbourhood.

There’s also the third hypothesis, families that are better off move to better areas (i.e. effects are accounted for by unobserved family differences):

The paper presents lots of modifications to the baseline model, but none of them can provide an exogenous choice of destination. They look at an exogenous cause of moving – natural disasters – and also instrument with the expected difference in income percentiles for parents from the same zip code, but I can’t see how this instrument is valid. Selection bias is acknowledged in the paper but without some exogenous variation in where a family moves to it’ll be difficult to really claim to have identified a causal effect. The choice to move is in the vast majority of family’s cases based on preferences over welfare and well-being, especially income. Indeed, why would a family move to a worse off area unless their circumstances demanded it of them? So in reality, I would imagine the truth would lie somewhere in between these three explanations.

As a slight detour, we might want to consider if these are causal effects, even if the underlying assumptions hold. The paper presents a range of analyses to show that the results are robust. But these analyses represent just a handful of those possible. Given that the key finding is relatively small in magnitude, one wonders what would have happened under different scenarios and choices – the so-called garden of forking paths problem. To illustrate, consider some of the choices that were made about the data and models, and all the possible alternative choices. The sample included only those with a mean positive income between 1996 to 2004 and those living in commuter zones with populations of over 250,000 in the 2000 census. Those whose income was missing were assigned a value of zero. Average income over 1996 to 2000 is a proxy for lifetime income. If the marital status of the parents changed then the child was assigned to the mother’s location. Non-filers were coded as single. Income is measured in percentile ranks and not dollar terms. The authors justify each of the choices, but an equally valid analysis would have resulted from different choices and possibly produced very different results.

The strategy of this paper is much like the first one, except that rather than trying to estimate the average effect of moving to higher or lower income areas, they try to estimate the effect of moving to each of 3,000 counties in the US. To do this they assume that the number of years exposure to the county is as good as random after taking account of i) origin fixed effects, ii) parental income percentile, and iii) a quadratic function of birth cohort year and parental income percentile to try and control for some differences in labour market conditions. An even stronger assumption than before! The hierarchical model is estimated using some complex two-step method for ‘computational tractability’ (I’d have just used a Bayesian estimator). There’s some further strange calculations, like conversion from percentile ranks into dollar terms by regressing the dollar amounts on average income ranks and multiplying everything by the coefficient, rather than just estimating the model with dollars as the outcome (I suspect it’s to do with their complicated estimation strategy). Nevertheless, we are presented with some (noisy) county-level estimates of the effect of an additional year spent there in childhood. There is a weak correlation with the income ranks of permanent residents. Again, though, we have the issue of many competing explanations for the observed effects.

The differences in predicted causal effect by county don’t help distinguish between our hypotheses. Consider this figure: 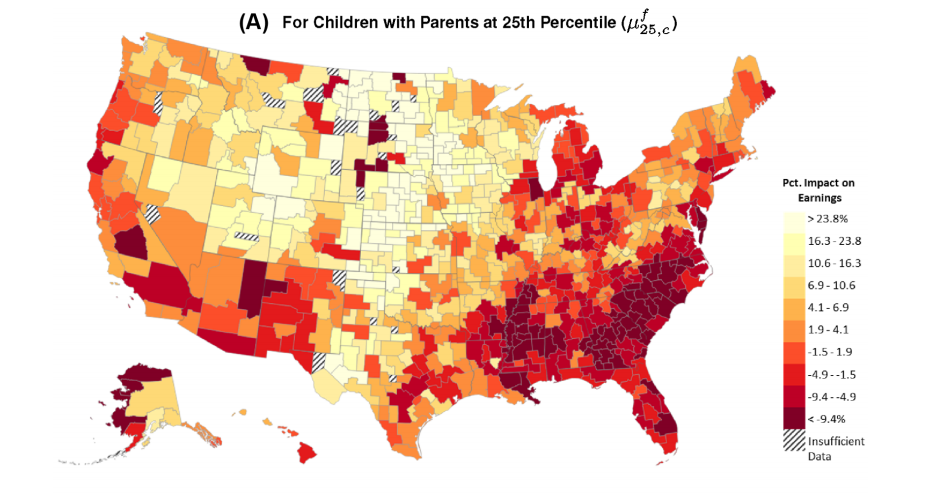 Do children of poorer parents in the Southern states end up with lower human capital and lower-skilled jobs than in the Midwest? Or does the market mean that people get paid less for the same job in the South? Compare the map above to the maps below showing wage rates of two common lower-skilled professions, cashiers (right) or teaching assistants (left):

A similar pattern is seen. While this is obviously just a correlation, one suspects that such variation in wages is not being driven by large differences in human capital generated through personal interaction with higher earning individuals. This is also without taking into account any differences in purchasing power between geographic areas.

What can we conclude?

I’ve only discussed a fraction of the contents of these two enormous papers. The contents could fill many more blog posts to come. But it all hinges on whether we can interpret the results as the average causal effect of a person moving to a given place. Not nearly enough information is given to know whether families moving to areas with lower future incomes are comparable to those with higher future incomes. Also, we could easily imagine a world where the same people were all induced to move to different areas – this might produce completely different sets of neighbourhood effects since they themselves contribute to those effects. But I feel that the greatest issue is the reflection problem. Even random assignment won’t get around this. This is not to discount the value or interest these papers generate, but I can’t help but feel too much time is devoted to trying to convince the reader of a ‘causal effect’. A detailed exploration of the relationships in the data between parental incomes, average incomes, spatial variation, later life outcomes, and so forth, might have been more useful for generating understanding and future analyses. Perhaps sometimes in economics we spend too long obsessing over estimating unconvincing ‘causal effects’ and ‘quasi-experimental’ studies that really aren’t and forget the value of just a good exploration of data with some nice plots.