Every Monday our authors provide a round-up of some of the most recently published peer reviewed articles from the field. We don’t cover everything, or even what’s most important – just a few papers that have interested the author. Visit our Resources page for links to more journals or follow the HealthEconBot. If you’d like to write one of our weekly journal round-ups, get in touch.

Probabilistic sensitivity analysis (PSA) is rightfully a required component of economic evaluations. Deterministic sensitivity analyses are generally biased; averaging the outputs of a model based on a choice of values from a complex joint distribution is not likely to be a good reflection of the true model mean. PSA involves repeatedly sampling parameters from their respective distributions and analysing the resulting model outputs. But how many times should you do this? Most times, an arbitrary number is selected that seems “big enough”, say 1,000 or 10,000. But these simulations themselves exhibit variance; so-called Monte Carlo error. This paper discusses making the choice of the number of simulations more formal by assessing the “convergence” of simulation output.

In the same way as sample sizes are chosen for trials, the number of simulations should provide an adequate level of precision, anything more wastes resources without improving inferences. For example, if the statistic of interest is the net monetary benefit, then we would want the confidence interval (CI) to exclude zero as this should be a sufficient level of certainty for an investment decision. The paper, therefore, proposed conducting a number of simulations, examining the CI for when it is ‘narrow enough’, and conducting further simulations if it is not. However, I see a problem with this proposal: the variance of a statistic from a sequence of simulations itself has variance. The stopping points at which we might check CI are themselves arbitrary: additional simulations can increase the width of the CI as well as reduce them. Consider the following set of simulations from a simple ratio of random variables 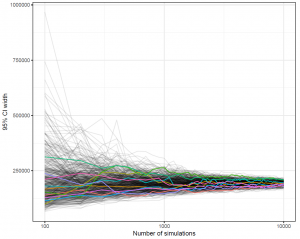 The “stopping rule” therefore proposed doesn’t necessarily indicate “convergence” as a few more simulations could lead to a wider, as well as narrower, CI. The heuristic approach is undoubtedly an improvement on the current way things are usually done, but I think there is scope here for a more rigorous method of assessing convergence in PSA.

Mortality due to low-quality health systems in the universal health coverage era: a systematic analysis of amenable deaths in 137 countries. The Lancet [PubMed] Published 5th September 2018

It would be a mistake to see science journals as merely repositories for research. They also stand for something. They advocate a set of values, articulate a vision for their discipline, and defend the rights of the communities they serve. These roles are worth protecting.

There is certainly an argument that academic journals are good forums to make advocacy arguments. Who better to interpret the analyses presented in these journals than the authors and audiences themselves? But, without a strict editorial bulkhead between analysis and opinion, we run the risk that the articles and their content are influenced or dictated by the political whims of editors rather than scientific merit. Unfortunately, I think this article is evidence of that.

No-one debates that improving health care quality will improve patient outcomes and experience. It is in the very definition of ‘quality’. This paper aims to estimate the numbers of deaths each year due to ‘poor quality’ in low- and middle-income countries (LMICs). The trouble with this is two-fold: given the number of unknown quantities required to get a handle on this figure, the definition of quality notwithstanding, the uncertainty around this figure should be incredibly high (see below); and, attributing these deaths in a causal way to a nebulous definition of ‘quality’ is tenuous at best. The approach of the article is, in essence, to assume that the differences in fatality rates of treatable conditions between LMICs and the best performing health systems on Earth, among people who attend health services, are entirely caused by ‘poor quality’. This definition of quality would therefore seem to encompass low resourcing, poor supply of human resources, a lack of access to medicines, as well as everything else that’s different in health systems. Then, to get to this figure, the authors have multiple sources of uncertainty including:

Despite this, the authors claim to estimate a 95% uncertainty interval with a width of only 300,000 people, with a mean estimate of 5.0 million, due to ‘poor quality’. This seems highly implausible, and yet it is claimed to be a causal effect of an undefined ‘poor quality’. The timing of this article coincides with the Lancet Commission on care quality in LMICs and, one suspects, had it not been for the advocacy angle on care quality, it would not have been published in this journal.

Embedding as a pitfall for survey‐based welfare indicators: evidence from an experiment. Journal of the Royal Statistical Society: Series A Published 4th September 2018

Health economists will be well aware of the various measures used to evaluate welfare and well-being. Surveys are typically used that are comprised of questions relating to a number of different dimensions. These could include emotional and social well-being or physical functioning. Similar types of surveys are also used to collect population preferences over states of the world or policy options, for example, Kahneman and Knetsch conducted a survey of WTP for different environmental policies. These surveys can exhibit what is called an ’embedding effect’, which Kahneman and Knetsch described as when the value of a good varies “depending on whether the good is assessed on its own or embedded as part of a more inclusive package.” That is to say that the way people value single dimensional attributes or qualities can be distorted when they’re embedded as part of a multi-dimensional choice. This article reports the results of an experiment involving students who were asked to weight the relative importance of different dimensions of the Better Life Index, including jobs, housing, and income. The randomised treatment was whether they rated ‘jobs’ as a single category, or were presented with individual dimensions, such as the unemployment rate and job security. The experiment shows strong evidence of embedding – the overall weighting substantially differed by treatment. This, the authors conclude, means that the Better Life Index fails to accurately capture preferences and is subject to manipulation should a researcher be so inclined – if you want evidence to say your policy is the most important, just change the way the dimensions are presented.