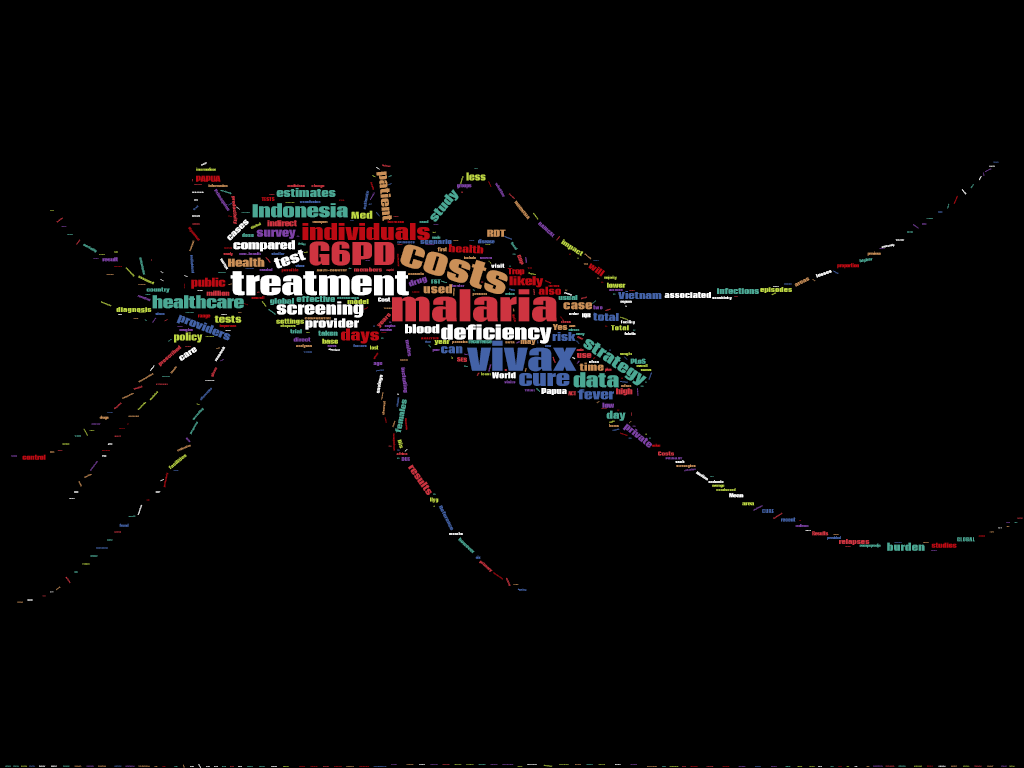 On the third Thursday of every month, we speak to a recent graduate about their thesis and their studies. This month’s guest is Dr Angela Devine who has a PhD from The Open University. If you would like to suggest a candidate for an upcoming Thesis Thursday, get in touch.

What is vivax malaria and what are some of the key challenges that it presents for health economists?

One infectious bite from a mosquito carrying vivax malaria can lead to multiple episodes of malaria due to dormant liver parasites called hypnozoites. We can’t tell the difference between these relapse infections and new infections, which means that it’s challenging to model. Unlike falciparum malaria, which frequently results in severe outcomes and deaths, vivax malaria doesn’t often result in direct mortality. Instead, it likely causes indirect mortality through the malnutrition and anaemia that are caused by repeated malaria episodes. Unfortunately, the evidence of this is limited.

To prevent future relapses, patients need to be given a drug to treat the liver parasites (radical cure) in addition to treating the blood stage treatment. The only drug that is currently licensed for radical cure, primaquine, can cause potentially life-threatening haemolysis in individuals who have a genetic disorder called glucose-6-phosphate-dehydrogenase (G6PD) deficiency. While some countries are so concerned about haemolytic events that primaquine isn’t used at all, other settings prescribe primaquine to everyone. The evidence on the risk of primaquine-induced haemolysis and death is sparse, and expert opinion on this matter is fiercely divided.

How did you go about collecting the data needed for your study?

Not much has been done previously on vivax malaria costs, which meant that a lot of my work involved generating cost data. I started by analysing some fairly old data that my supervisors had from a study on treatment-seeking behaviour in Papua, Indonesia. The cost of illness study indicated that household costs were similar for both vivax and falciparum malaria in 2006. I also collected provider and patient-level cost data alongside a multi-country clinical trial on vivax malaria treatment. I wasn’t able to travel to the some of the study sites (e.g. Afghanistan) to collect the provider costs, so I had to create worksheets for local trial staff to fill out. It was an iterative process, particularly with the first site in Indonesia, but it got faster and easier to do each time. I’m very thankful that the local teams were enthusiastic about this work and patient with my many questions and requests.

What is the economic burden of vivax malaria and who bears the cost?

A lot of vivax malaria episodes occur in remote areas where access to care is limited. The highest incidence of the disease is in children, particularly those under the age of five. This often means that someone will need to take time off from usual activities, such as farming, attending school, or household chores, to care for the sick. I estimated the global economic burden to be US$330 million. These estimates don’t include mortality, malnutrition or anaemia. Since we know that repeated episodes can have a profound impact on a household’s income, I included productivity losses for those who were ill and their carers. We also know that malaria causes educational losses, so I included these productivity costs for children as well as adults to try to capture some of those losses. In total, productivity losses accounted for US$263 million, nearly 80% of the total costs. Since many who are affected by this disease aren’t paid for their work, I used one GDP per capita per day for every day lost to illness or caretaking. Other methods of valuing these losses would have a substantial impact on the total costs. While there’s a considerable amount of uncertainty around some of the numbers I used and assumptions that I made, my hope is that by identifying the issues, we will be able to generate the data needed for better estimates in the future.

What methods did you use to evaluate the cost-effectiveness of new treatment strategies?

Asia-Pacific malaria control programs stated that the cost of G6PD screening was an obstacle to its widespread use. My research addressed those concerns through a decision tree model in R that weighed up the costs, risks and benefits of screening using newly developed G6PD rapid diagnostic tests (RDTs) before prescribing primaquine. I wanted to make this work as relevant to policymakers as possible, so I did two separate comparisons. First I compared this strategy to not using primaquine, then I compared it to prescribing primaquine to everyone without screening. While this strayed from typical economic evaluation methods, it seemed unlikely that a setting where primaquine isn’t prescribed due to fear of haemolysis would switch to prescribing primaquine to everyone without screening, or that a setting where primaquine is prescribed to everyone would stop using it altogether.

As G6PD deficiency is X-linked, the risk of haemolysis varies by gender, so results need to be stratified by gender. The prevalence and severity of G6PD deficiency and the latency period and number of relapses for vivax malaria varies geographically. While I wanted to have more than one setting to explore how these might impact the results, four comparisons was already a lot of information to present. Instead, I used R-shiny with my model to create an interactive website where people can see how changes in the baseline model parameters impact the results. My goal was to provide a tool that policymakers could use to help make decisions about treatment strategies in their settings. This also provides an opportunity to explore the impact of parameter values that may be seen as contentious.

What are some of the issues you encountered in working with policymakers to ensure that cost-effective treatments become more widely used?

One issue is that patients, especially those who can afford to do so, seek treatment in the private sector, which is harder to control. Encouragingly, the follow-up survey in Papua, Indonesia indicated that changing treatment policy in the public sector also had an impact on how private sector providers diagnosed and treated malaria. As someone keen to influence policy, I benefited a lot from meetings with malaria control program officials from the Asia Pacific. These provided insights on the challenges that countries are facing. For example, the work I did on G6PD screening was aimed at addressing the cost issue that kept coming up in these meetings. Unfortunately, I’m not aware of settings where they have begun to routinely use G6PD RDTs. There are additional barriers, like getting the tests licensed so that malaria control programs can purchase them with a subsidy from The Global Fund. Another issue that I hadn’t fully appreciated before beginning my PhD is that funding for diseases like malaria is often siloed for specific purposes by the various donors. This can make it more challenging to ensure that countries are getting the best possible value for the money that is spent. There’s also been a lot of debate recently about what willingness to pay threshold should be used in poorly resourced settings. This is a debate that we need to have, but it also makes it more challenging to decide which treatments should be considered to be cost-effective.