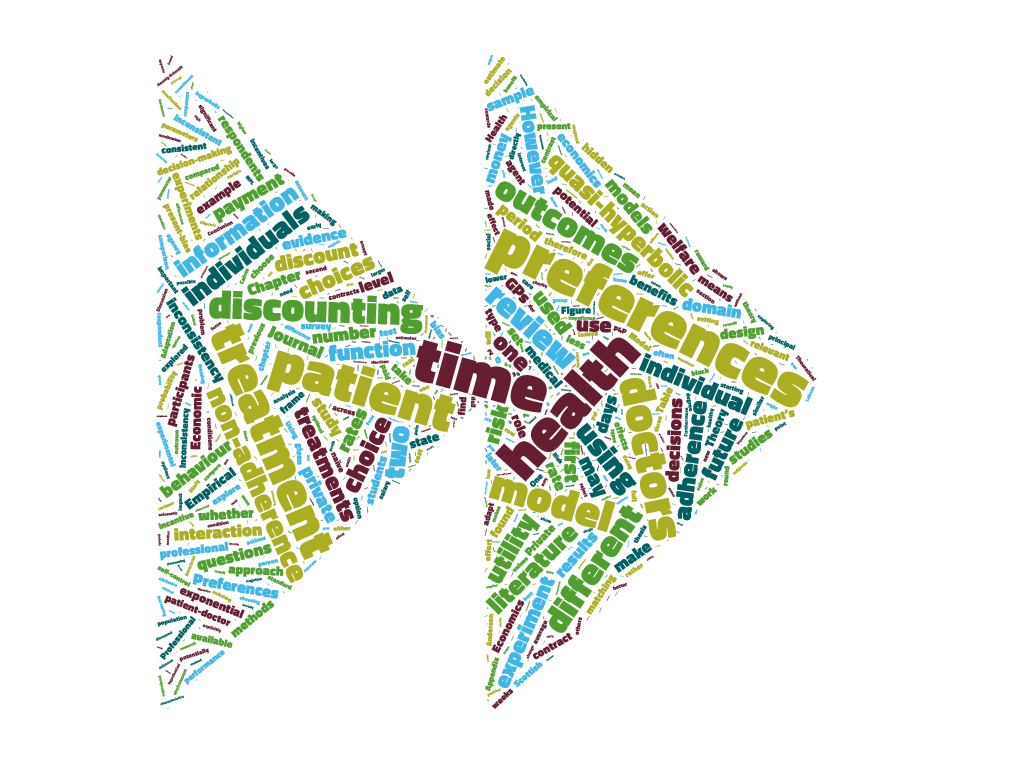 On the third Thursday of every month, we speak to a recent graduate about their thesis and their studies. This month’s guest is Dr Alastair Irvine who has a PhD from the University of Aberdeen. If you would like to suggest a candidate for an upcoming Thesis Thursday, get in touch.

How can people’s time preferences affect the way they use health care?

Time preferences are a way of thinking about how people choose between things that happen over time. Some people prefer a treatment with large side effects and a long chain of future benefits; others prefer smaller benefits but less side effects. These influence a wide range of health outcomes and decisions. One of the most interesting questions I had coming into the PhD was around non-adherence.

Non-adherence can’t be captured by ‘standard’ exponential time preferences because there is no way for something you prefer now to be ‘less preferred’ in the future if everything is held constant. Instead, present-bias preferences can capture non-adherent behaviour. With these preferences, people place a higher weight on the ‘current period’ relative to all future periods but weight all future periods consistently. What that means is you can have a situation where you plan to do something – eat healthily, take your medication – but end up not doing it. When planning, you placed less relative weight on the near term ‘cost’ (like medication side effects) than you do when the decision arrives.

In what way might the patient-doctor interaction affect a patient’s adherence to treatment?

There’s asymmetric information between doctors and patient, leading to an agency relationship. Doctors in general know more about treatment options than patients, and don’t know their patient’s preferences. So if doctors are making recommendations to patients, this asymmetry can lead to recommendations that are accepted by the patient but not adhered to. For example, present-biased patients accept the same treatments as exponential discounters. Depending on the treatment parameters, present-biased people will not adhere to some treatments. If the doctor doesn’t anticipate this when making recommendations, it leads to non-adherence.

One of the issues from a contracting perspective is that naive present-bias people don’t anticipate their own non-adherence, so we can’t write traditional ‘separating contracts’ that lead present-bias people to one treatment and exponential discounters to another. However, if the doctor can offer a lower level of treatment to all patients – one that has less side effects and a concomitantly lower benefit – then everyone sticks to that treatment. This clearly comes at the expense of the exponential discounters’ health, but if the proportion of present-bias is high enough it can be an efficient outcome.

Were you able to compare the time preferences of patients and of doctors?

Not this time! It had been the ‘grand plan’ at the start of the PhD to compare matched doctor and patient time preferences then link it to treatment choices but that was far too ambitious for the time, and there had been very little work establishing how time preferences work in the patient-doctor interaction so I felt we had a lot to do.

We found that while there was little difference between these professional and private time preferences, a lot of the responses displayed increasing impatience. This means that as the start of treatment gets pushed further into the future, doctors started to prefer shorter-but-sooner benefits for themselves and their patients. We’re still thinking about whether this reflects that in the real world (outside the survey) doctors already account for the time patients have spent with symptoms when assessing how quickly a treatment benefit should arrive.

How could doctors alter their practice to reduce non-adherence?

We really only have two options – to make ‘the right thing’ easier or the ‘wrong thing’ more costly. The implication of present-bias is you need to use less intense treatments because the problem is the (relative) over-weighting of the side effects. The important thing we need for that is good information on adherence.

We could pay people to adhere to treatment. However, my gut feeling is that payments are hard to implement on the patient side without being coercive (e.g making non-adherence costly with charges) or expensive for the implementer when identification of completion is tricky (giving bonuses to doctors based on patient health outcomes). So doctors can reduce non-adherence by anticipating it, and offering less ‘painful’ treatments.

It’s important to say I was only looking at one kind of non-adherence. If patients have bad experiences then whatever we do shouldn’t keep them taking a treatment they don’t want. However, the fact that stopping treatment is always an option for the patient makes non-adherence hard to address because as an economist you would like to separate different reasons for stopping. This is a difficulty for analysing non-adherence as a problem of temptation. In temptation preferences we would like to change the outcome set so that ‘no treatment’ is not a tempting choice, but there are real ethical and practical difficulties with that.

To what extent did the evidence generated by your research support theoretical predictions?

I designed a lab experiment that put students in the role of the doctor with patients that may or may not be present-biased. The participants had to recommend treatments to a series of hypothetical patients and was set up so that adapting to non-adherence with less intense treatments was best. Participants got feedback on their previous patients, to learn about which treatments patients stuck to over the rounds.

We paid one arm a salary, and another a ‘performance payment’. The latter only got paid when patients stuck to treatment and the pay correlated with the patient outcomes. In both arms, patients’ outcomes were reflected with a charity donation.

The main result is that there was a lot of adaptation to non-adherence in both arms. The adaptation was stronger under the performance payment, reflecting the upper limit of the adaptation we can expect because it perfectly aligns patient and doctor preferences.

In the experimental setting, even when there is no direct financial benefit of doing so, participants adapted to non-adherence in the way I predicted.