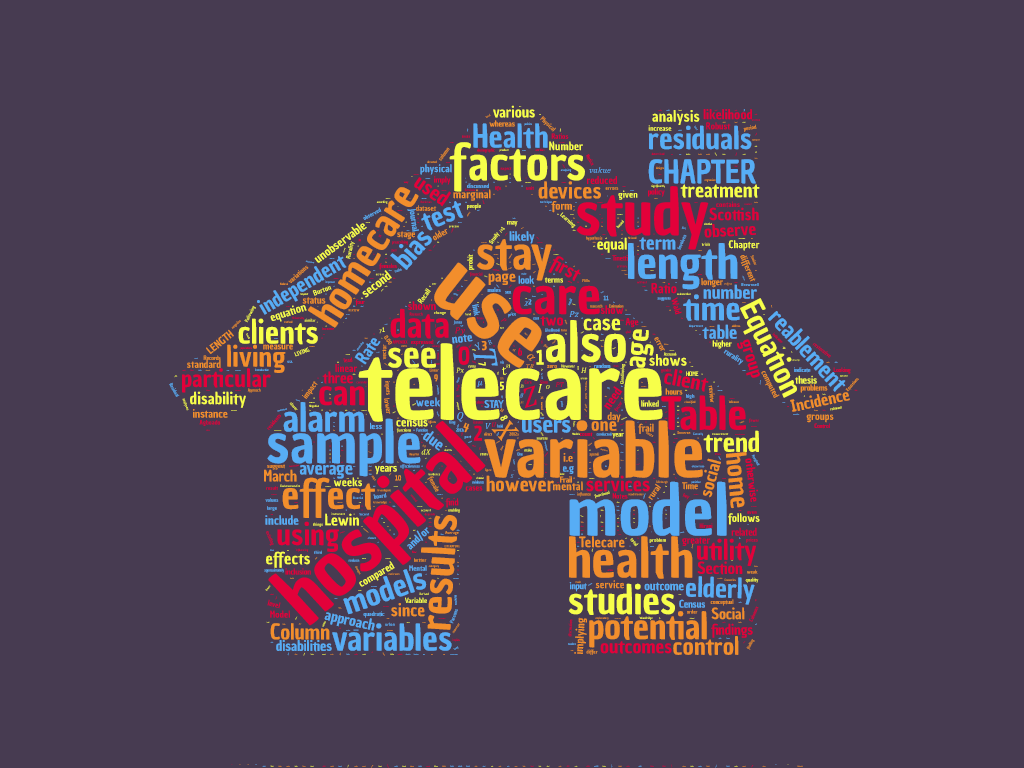 On the third Thursday of every month, we speak to a recent graduate about their thesis and their studies. This month’s guest is Dr Kevin Momanyi who has a PhD from the University of Aberdeen. If you would like to suggest a candidate for an upcoming Thesis Thursday, get in touch.

What are reablement and telecare services and why should economists study them?

Reablement and telecare are two types of services within homecare that enable individuals to live independently in their own homes with little or no assistance from other people. Reablement focuses on helping individuals relearn the skills needed for independent living after an illness or injury. It is a short term intervention that lasts for about 6 to 12 weeks and usually involves several health care professionals and social care workers working together to meet some set objectives. Telecare, on the other hand, entails the use of devices (e.g. community alarms and linked pill dispensers) to facilitate communication between homecare clients and their care providers in the event of an accident or negative health shock. Economists should study reablement and telecare so as to determine whether or not the services have value for money and also develop policies that would reduce social care costs without compromising the welfare of the populace.

In what ways did your study reach beyond the scope of previous research?

My study extended the previous studies in three main ways. Firstly, I estimated the treatment effects in a non-experimental setting unlike the previous studies that used either randomised controlled trials or quasi-experiments. Secondly, I used linked administrative health and social care data in Scotland for the 2010/2011 financial year. The data covered the administrative records for the entire Scottish population and was larger and more robust than the data used by the previous studies. Thirdly, the previous studies were simply concerned with quantifying the treatment effects and thus did not provide a rationale as to how the interventions affect the outcomes of interest. My thesis addressed this knowledge gap by formulating an econometric model that links the demand for reablement/telecare to several outcomes.

How did you go about trying to estimate treatment effects from observational data?

I used a theory driven approach combined with specialised econometric techniques in order to estimate the treatment effects. The theoretical model drew from the Almost Ideal Demand System (AIDS), Andersen’s Behavioural Model of Health Services Use, the Grossman Model of the demand for health capital, and Samuelson’s Revealed Preference Theory; whereas the estimation strategy simultaneously controlled for unexplained trend variations, potential endogeneity of key variables, potential sample selection bias and potential unobserved heterogeneity. For a more substantive discussion of the theoretical model and estimation strategy, see Momanyi, 2018. Although the majority of the studies in the econometric literature advocate for the use of quasi-experimental study designs in estimating treatment effects using observational data, I provided several proofs in my thesis showing that these designs do not always yield consistent results, and that estimating the econometric models in the way that I did is preferable since it nests several study designs and estimation strategies as special cases.

Are there key groups of people that could benefit from greater use of reablement and telecare services?

What would be your main recommendation for policymakers in Scotland?

The main recommendation for policymakers is that they ought to subsidise the cost of telecare services, especially in regions that currently have relatively low utilisation levels, so as to increase the uptake of telecare in Scotland. This was informed by a decomposition analysis that I conducted in the first empirical study to shed light on what could be driving the observed direct relationship between telecare use and independent living at home. The analysis showed that the treatment effect was in part due to the underlying differences (both observable and unobservable) between telecare users and non-users, and thus policymakers could stimulate telecare use in the population by addressing these differences. In addition to that, policymakers should advise the local authorities to target telecare services at the groups of people that are most likely to benefit from them as well as sensitise the population on the benefits of using community alarms. This is because the econometric analyses in my thesis showed that the treatment effects are not homogenous across the population, and that the use of a community alarm is expected to reduce the likelihood of unplanned hospitalisation, whereas the use of the other telecare devices has the opposite effect all else equal.

Can you name one thing that you wish you could have done as part of your PhD, which you weren’t able to do?

I would have liked to include in my thesis an empirical study on the effects of reablement services. My analyses focused only on telecare use as the treatment variable due to data limitations. This additional study would have been vital in validating the econometric model that I developed in the first chapter of the thesis as well as addressing the gaps in knowledge that were identified by the literature review. In particular, it would have been worthwhile to determine whether reablement services should be offered to individuals discharged from hospital or to individuals who have been selected into the intervention directly from the community.