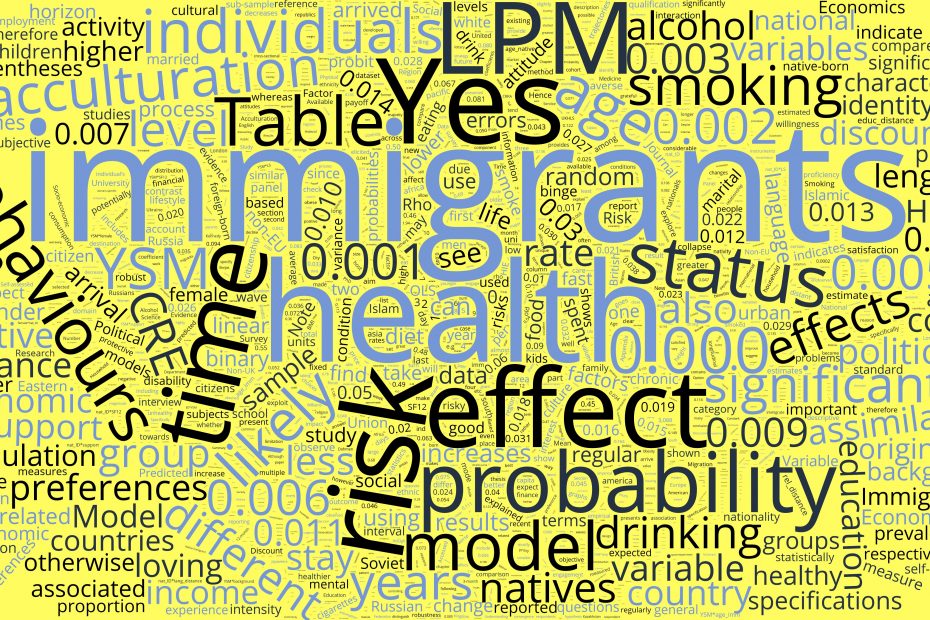 On the third Thursday of every month, we speak to a recent graduate about their thesis and their studies. This month’s guest is Dr Ekaterina Bordea who has a PhD from City, University of London. If you would like to suggest a candidate for an upcoming Thesis Thursday, get in touch.

Why might immigrants be more or less healthy than the native population?

A decision to immigrate involves risk and uncertainty. Immigrants have imperfect information on the labour market, leisure time, social mobility and the general environment in the destination country. They have to give up the close relationships with family and friends they leave behind. It requires high willingness to take risks, strong motivation, and good health.

Hence, immigrants are a highly selected group of individuals, including by health. This is one of the most common mechanisms that is used to explain the so-called ‘healthy immigrant effect’ (HIE): immigrants arrive being healthier compared to the native population but immigrants’ health deteriorates over time and at a faster speed than health of natives. There are other mechanisms that may be able to explain the healthy immigrant effect: host countries’ migration policies, medical examination of immigrants at the point of arrival, healthier lifestyle in the origin countries, and differences in reporting health due to different cultural backgrounds. In my thesis, I explore the mechanisms of immigrants’ health deterioration after the arrival, the difference in risk preferences between immigrants and natives, the acculturation with the native population, and the reason for migration.

What were the key data sources that you used in your research?

I exploited two large panel surveys: the UK Household Longitudinal Survey (UKHLS) and the Russian Longitudinal Monitoring Survey (RLMS). The UKHLS is a household longitudinal study started in 2009 aimed at developing further its predecessor, the British Household Panel Survey (BHPS). The purpose of the survey is to study the dynamics of the population in the UK. The overall sample includes almost 40,000 households. It contains four components: the general population sample, ethnic minority boost sample, BHPS sample, and the Innovation Panel. I used both the general population sample and the Innovation Panel. The latter incorporates various experiments across the waves. Wave 6 (2013) includes the module on risk and time preferences and health behaviours. The main analysis aims to link experimental and survey data on risk preferences.

The RLMS is a repeated sample with a split panel. A number of households is followed over time, however some households are added to each wave to make the sample representative of the entire population of the Russian Federation in that particular year. Its goal is to explore the effect of reforms on the health and economic welfare of individuals in the Russian Federation. The ongoing longitudinal survey was started in 1994 and surveys about 10,000 individuals each wave.

Is there anything surprising about the health behaviours of immigrants in the UK?

However, immigrants’ cultural distance from British culture affects their assimilation a lot. Immigrants whose culture is close to the British one do not change their behaviours, almost at all, over time and if they do this change is towards a less healthy lifestyle such as lower levels of physical activity and unhealthier diets. In contrast, those with distant cultures experience a considerable change in health behaviours but towards a healthier lifestyle.

How did you measure the impact of assimilation?

Health behaviour acculturation is part of the general process of acculturation of immigrants. All empirical studies of immigrants’ acculturation have suffered from the limitations of using cross-sectional or repeated cross-sectional data that are often temporarily biased. I address this problem by using panel data from the UKHLS. Two proxies for acculturation are used: length of stay, one of the most widely used measures in the literature, and national identity. I also include the factors that are believed to affect the acculturation process: cultural distance, social support, family background, life satisfaction, and mental health condition. Cultural distance has not previously been used in acculturation studies, however theory suggests it is important to account for how distant the culture of origin is from the host culture.

Why was the collapse of the Soviet Union a useful setting for your research?

I use the collapse of the Soviet Union as a quasi-experiment to remove many factors that are likely to be associated with health and health behaviours but are often unobserved in other immigrant populations: cultural background, health perception, language proficiency, personality traits that tend to be inherited from parents, etc.

Right after the collapse in 1991, and until 2001, citizens of the former Soviet Union republics could enter the Russian Federation without visas and claim Russian citizenship. The collapse created a unique population of political immigrants born outside of the current territory of the Russian Federation, but who are ethnically Russian, speak Russian language, and have very similar cultural and educational background to native Russians. I assume the reasons for migration to be exogenous to economic and health factors because these people were forced to move after the collapse due to Russian language not being an official language any more, loss of voting rights, destruction of existing jobs, and negative attitude from local authorities. This situation forced people to move irrespective of their age, gender, or socio-economic status.

The aim of policy-makers is to ensure that immigrants have access to health services and their health needs are met, as it is a part of successful integration into the receiving society. The health deterioration of immigrants leads to increases in morbidity and mortality. These, in turn, lead to increased health care costs and productivity losses.

The health deterioration is partially explained by the adoption of unhealthy lifestyles (e.g. alcohol drinking and obesity) that have a negative effect on education attainment and the probability of employment. Therefore, public health policies targeted towards specific groups of immigrants based on immigrants’ country of origin, national identity, and length of stay in the UK are expected to save future health care costs and individuals’ well-being, as well as improve their education and labour market outcomes.

The data from the Russian Federation show that political immigrants have different health behaviour convergence from economic immigrants and should be considered separately by policy-makers. Specifically, it is crucial to address the needs of political immigrants, who arrived later in life, as they experience the greatest decline in health outcomes.