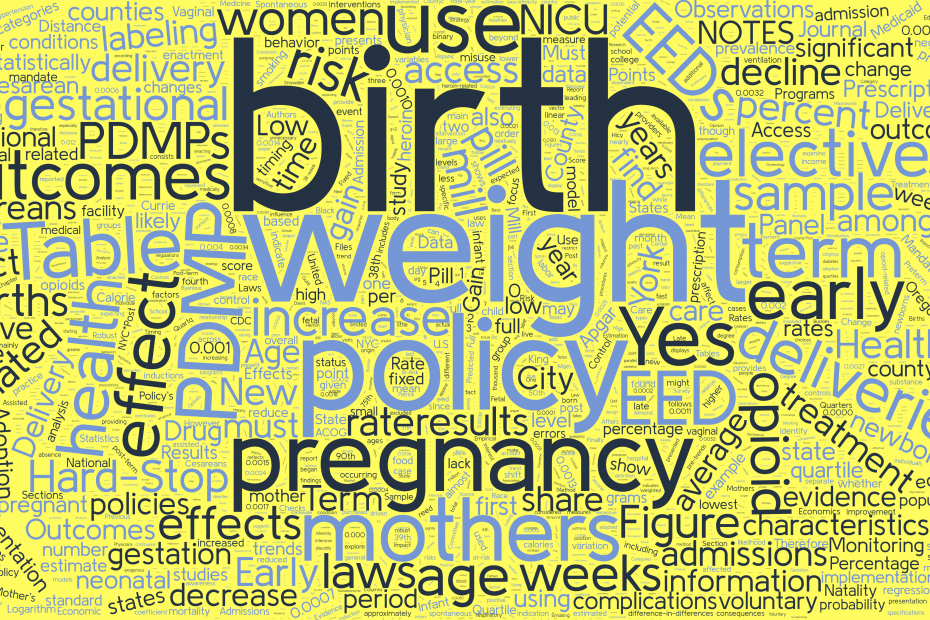 On the third Thursday of every month, we speak to a recent graduate about their thesis and their studies. This month’s guest is Dr Koray Caglayan who has a PhD from Tulane University. If you would like to suggest a candidate for an upcoming Thesis Thursday, get in touch.

What were the experimental settings for your research?

The experimental setting in my research usually involves a statewide or federal public policy. I am an applied microeconomist working on health-related issues with a special interest in the determinants and long-term effects of early-life health capital. I use quasi-experimental methods and causal inference to address policy-relevant questions.

The federal system in the US provides a favorable setting to leverage public policy as a quasi-experiment. The variation across states and time in the implementation of a policy enables the research design for identification of causal links. Most of the time, I am also interested in the overall impact of the policy besides the exogenous shock it creates that I need for identification. In that sense, I am also interested in policy evaluation studies. There are also challenges associated with using public policy as an experimental setting, especially while using statewide policies. Regulations and provisions of the ‘same’ policy might differ from state to state, which is difficult to incorporate into empirical work. Also, it might be challenging to convince your audience about the external validity of the results, especially if the treated state or region is unique in many ways.

How are birth outcomes affected by policy on early term elective deliveries?

In 2011, Oregon hospitals committed to a voluntary ‘hard-stop’ policy to eliminate early-term elective deliveries, which are medically unnecessary inductions and cesarean sections performed during the 37th or the 38th week of pregnancy. The policy led to a 30 percent decline in the practice among mothers with the highest risk of having an early elective delivery. This decline was followed by an increase in gestational age (around a day on average) and birth weight (17 grams on average). However, I did not find a change in neonatal intensive care unit (NICU) admissions, the use of assisted ventilation, or the prevalence of low Apgar score after the implementation of the policy.

An interesting finding of the study was the behavioral response of mothers and physicians to the restrictions of the hard-stop policy. I found that the policy reduced the practice of early elective deliveries mainly by shifting elective cesareans from the 38th week to the 39th week of pregnancy, leaving the overall cesarean rate unchanged. This shift involved relatively healthier mothers, as ‘elective’ implies no medical condition. I interpret this finding as a plausible explanation for the lack of improvement in the prevalence of neonatal complications because, given the mother has no medical condition, the risk of neonatal complications does not differ significantly whether the delivery happened at the 38th or the 39th week of pregnancy.

Rodrigo Aranda Balcazar, a fellow graduate student at Tulane University at the time, and I found evidence that disclosure of information changes maternal dietary behavior during pregnancy. We used the 2008 New York City calorie labeling mandate as a quasi-experiment to identify the effect of information disclosure on maternal weight gain during pregnancy. The mandate required fast-food chains to post the calorie content of their standardized menu items at the point of purchase.

What did you find with respect to maternal opioid use?

The opioid epidemic in the US has affected almost all parts of society, and expecting mothers are not an exception. Infants born to mothers suffering opioid use disorder during pregnancy have a high chance of experiencing neonatal abstinence syndrome (NAS), a condition characterized by irritability, tremors, and excessive crying, and is associated with negative outcomes that include low birth weight and preterm birth. My co-authors, Kevin Callison, Abraham Asfaw, and I were interested in the implications of policies designed to reduce prescription opioid use on newborn health. More specifically, we used prescription drug monitoring programs (PDMPs) and pain clinic regulations as quasi-experimental settings to identify the effect of maternal opioid use disorder during pregnancy on birth outcomes.

We found no evidence to suggest that PDMPs or pill mill laws have improved birth outcomes. To reconcile this unexpected result, we explored a potential mechanism through which policies that restrict the supply of prescription opioids might negatively influence health: substitution to heroin.

Using data on inpatient admissions to substance use treatment facilities, we found that a certain type of PDMP and pill mill laws are associated with fewer opioid-related admissions for the general population, women of child-bearing age, and pregnant women. However, we also found evidence of corresponding increases in treatment admissions for heroin for all three populations that we analyzed. We recently gained access to state-level Healthcare Cost and Utilization Project (HCUP) inpatient data, which will enable us to identify changes in the prevalence of NAS.

What were some of the key methodological challenges that you faced?

I believe that access to detailed and high-quality data is a challenge for all empirical researchers, regardless of discipline. I frequently use natality files from Vital Statistics, which come from birth certificates and is the census of all live births in the US. It is a very rich and large data set containing information about newborns and mothers. However, revisions and discontinuities in the data pose challenges, especially when studying with long sample periods.

Another challenge is to ensure that the research design is not exposed to contemporaneous shocks. Subjects such as maternal and child health, reproductive health and infant health are always on the agenda of policy makers. Therefore, there is always a new policy, an initiative, or a program at the hospital, healthcare system, payer or state level that potentially affects pregnancy and birth outcomes. It is difficult to take all these shocks into account while designing the research to achieve a clean identification.