Enrico Fermi was a physicist well known for his ability to make good approximations to difficult questions. A well-known Fermi problem is ‘how many piano tuners are there in Chicago?’ Answering these sorts of questions involves using estimates of simpler quantities that, if correct, yield the correct answer when combined. Indeed, we could consider these calculations as arising from a simple model. Many public health policies can be approached in this way and yet, despite large amounts of journal space devoted to these issues, the debate usually revolves around the quality of the evidence. So why aren’t these sorts of calculations commonplace as a start to informing the debate? Consider the following two examples.

This gives around 9,000 premature deaths avoided each year. And similarly at a cost of about £350 per person per year (£3b annual NHS costs divided by 8.8m smokers), a saving of approximately £14.5m per year. As a further cost to a regulated market we could add uptake of e-cigarette use by never smokers – about 56,000 people. Taking this into account, we get 8,600 premature deaths avoided and £13.5m saved. But, the benefits are likely to rise as public information increases and more people aim to quit smoking, which already seems to be the case (figure, left). Smoking consumption among e-cigarette using smokers (1.3m in the UK) may also be declining (figure, right). 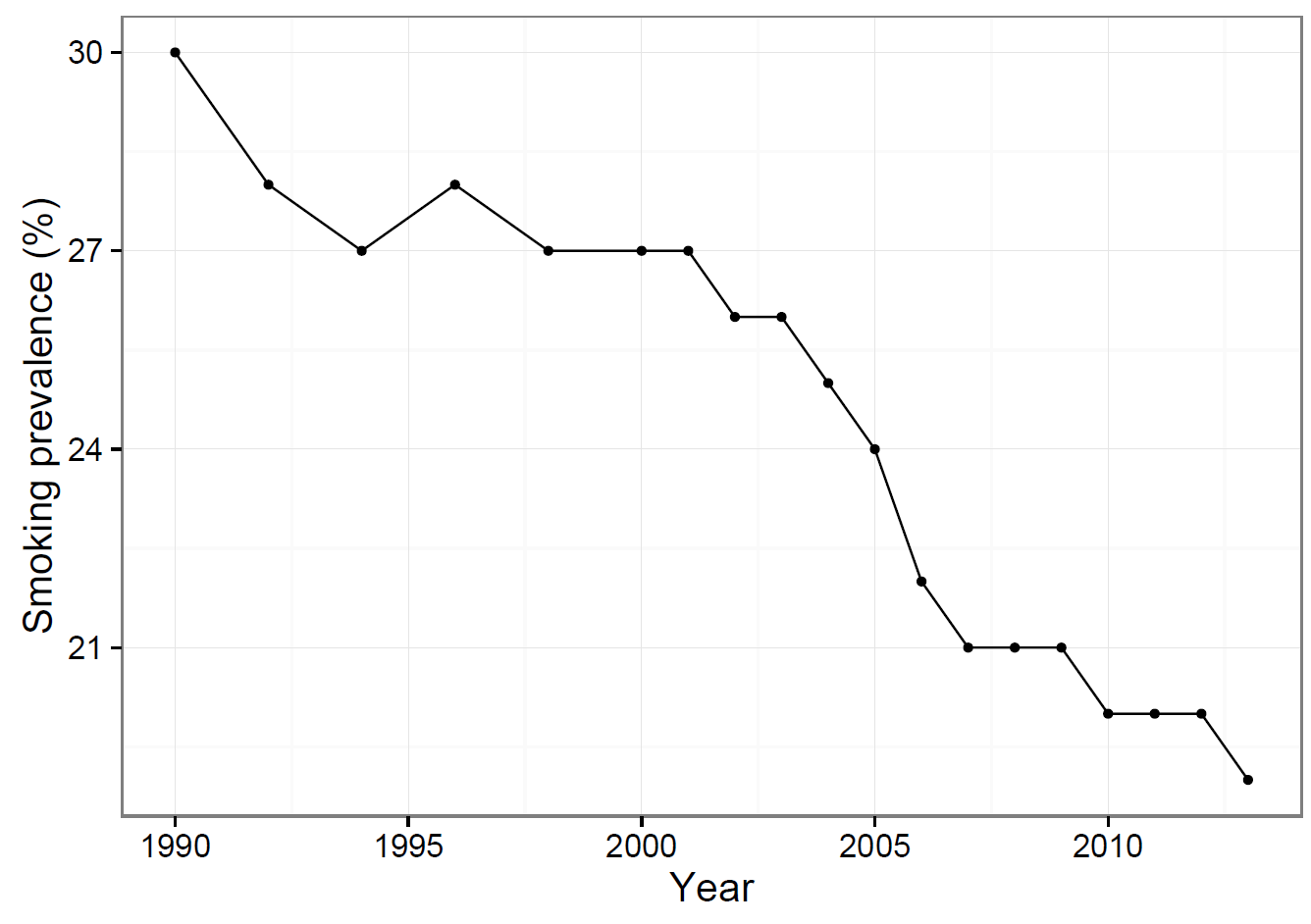 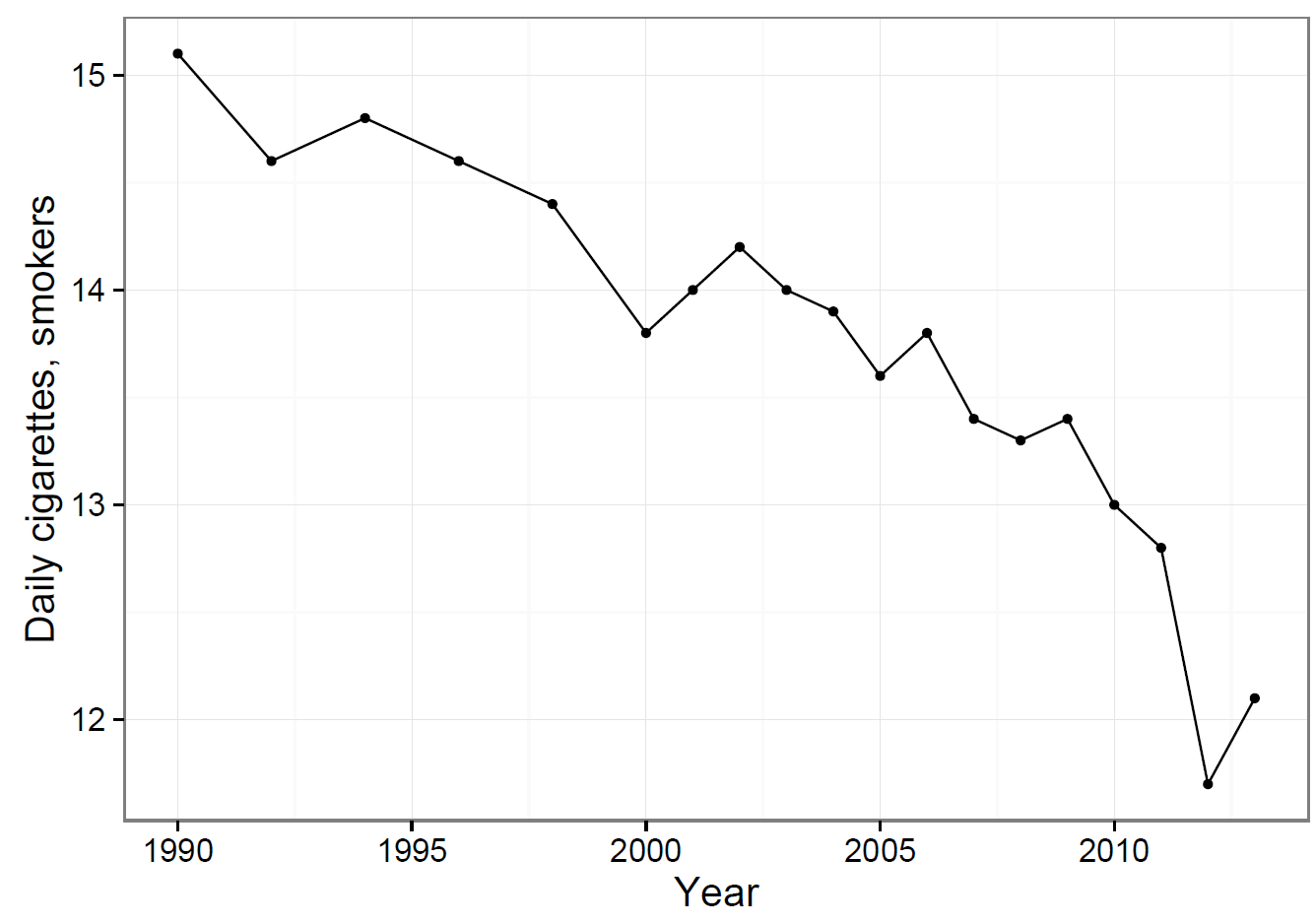 Figure. Left – smoking prevalence by year in the UK. Right – daily cigarette consumption among smokers in the UK. Source data.

Seven day NHS services are a key aspect of current government healthcare policy. The aim is to reduce the so-called weekend effect: the increased risk of mortality associated with weekend admission versus weekday admission. Rachel Meacock described her paper on this blog that attempted to value those ‘excess’ deaths to see if the seven day policy met typical cost-effectiveness standards (they did not). But, as they and others have noted, not all of these deaths are preventable. We can attempt to come up with an estimate of how many of those deaths are preventable based upon what we know. So, we multiply:

Which gives 820 preventable deaths. This is 15% of the total number of deaths associated with weekend admission, which would suggest that the benefits of preventing these deaths are 15% of the size estimated by Meacock et al.

Certainly, these are not thorough statistical analyses and do not capture the uncertainties involved. They are Fermi Problems and they are a simple attempt to inform the debate. The quality of the evidence is of course key to ensuring the estimates informing the calculations are correct. For example, the 95% reduction in risk associated with e-cigarettes is disputed by some. But, that figure would have to be close to zero, or there would have to be some very large unaccounted-for cost to regulation in order to favour prohibition.

There are, of course, moral, political, and legal dimensions to policy formation. Policy analysis simply provides the figures to inform that debate. In some cases no further evidence might be forthcoming, leaving such calculations as the only option. For example, policy aimed at mitigating pandemic influenza requires studies from a pandemic, and it is too late when one occurs. Even a back of the envelope calculation like this is preferable to basing policy on intuition and whim alone.

[…] public health researchers and campaigners as we’ve previously discussed. E-cigarettes are a substitute for tobacco smoking and are likely to be significantly less harmful. They may have contributed to large declines in the use of tobacco in the UK in the last few years. […]

[…] section that examines decisions implied by the results if possible or that uses alternative simple calculations and opinion as posterior model checks would be desirable. At the very least the seven day NHS […]

Weekend effect explainer: why we are not the ‘climate change deniers of healthcare’ | The Academic Health Economists' Blog

[…] on. We have previously covered the arguments on this blog and suggested that the best explanation for the weekend effect is that healthier patients are less likely to be admitted to hospital at the weekend. Nevertheless, […]

[…] may not support increasing clinical staff provision at the weekend. The evidence we have previously covered on this blog provides preliminary evidence that it is highly unlikely that the 7-day NHS policy […]

[…] Recent federal healthcare reform in the United States mandates insurance companies to provide access to preventative health services and prohibits cost-sharing for these schemes. One such service is breast cancer screening using mammograms. The aim of the reform is to increase utilization of such screening programs, which a number of US bodies have determined is currently too low. This paper investigates the effects the healthcare reform had on mammogram uptake and finds significant increases in the numbers of screened women and diagnoses of breast cancer. The authors do attempt to address one of the key questions about breast cancer screening programs – that they may cause more harm than good. They find that in most cases the increases in screening were not consistent with guidelines from the American Cancer Society, suggesting harms were being caused by the program. Perhaps another case of policy not following the evidence. […]